The last eight weeks have not been easy for any kid in Austin. Children have had to cope with routines upended, social connections to friends and teachers broken, and attention from parents—many of whom are working from home—not always available.

The frustrations over those difficult changes can come out in different ways. For Ruth Tovar's 10-year-old daughter, Miriam, they boiled over in April.

"She was crying and crying. I finally asked her what's wrong. She just told me she's sad all the time. That wasn't easy to hear," Tovar said.

Tovar said she prayed with her daughter after hearing that. Miriam is finishing up fifth grade at Brooke Elementary School and will be attending Martin Middle School next year.

"I told her that it’s OK to feel that way. 'I understand why you feel that way; I know you miss school. But we’re going to be ok. This is going to pass,'" Tovar said.
RELATED STORIES

• Tumble 22 will take over former Magnolia Cafe location in July

Anya Wiley said she had a similar experience in her family recently when the anger and pain caused by the coronavirus pandemic became too much to handle for her 7-year-old daughter, Aniya, whose second-grade year is coming to an end at Pease Elementary School. Aniya will attend Bryker Woods Elementary School next year.

"She just laid on the floor and just bawled. I let her cry and get it out. That’s what she needs. When she finished she came to me, and I gave her a huge hug," Wiley said.

These are universal challenges for families in Austin since in-person classes were canceled March 13, but they are amplified for families at Brooke and Pease.

Noelita Lugo has three children at home, including 6-year-old Henry and 9-year-old Pete, both students at Pease. She said the juggling act of working from home and being a parent has been a challenge.

"I’ve been struggling with mom guilt. If you’re working, you’re taking care of your family one way, but you can’t help with distance learning. If you’re helping with learning, then something else isn’t getting taken care of," Lugo said.

Reactions to the closings have not been the same for every student.

Wiley, who attended Pease when she was a child, said her daughter is disappointed she cannot have some of the same experiences her mom and her older brother had. Lugo said her boys have adjusted to the idea of attending a new school next year, but the anxiety of not knowing whether they will be able to go back to a normal routine in the fall has been difficult.

"This month especially has been tough on them. I think in some ways it’s finally hitting them—we don’t know when you guys are going back," Lugo said. 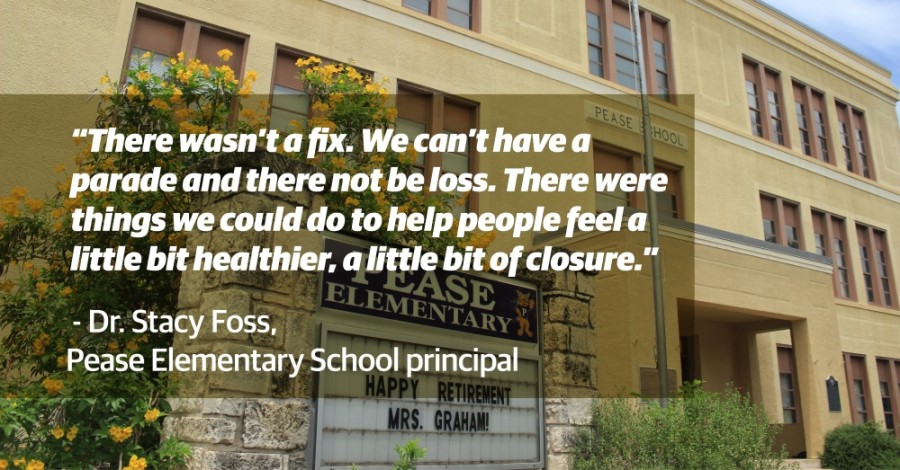 On May 28, both the Brooke and Pease communities held rolling parades around the schools. Families decorated their cars and drove slowly, honking their car horns, past teachers and staff who were holding signs, waving and offering some words of encouragement.

The parades were a way to connect one last time with the community. Pease Principal Stacy Foss also said the school will be sending painted wooden "memory boxes" with photos inside to each of the families.

"There wasn't a fix. We can't have a parade and there not be loss. There were things we could to make people feel a little bit healthier, a little bit of closure," Foss said.

Brooke Principal Griselda Galindo-Vargas said teachers felt those pangs of loss when they returned to the campus to gather up their materials.

"The hardest thing for teachers is once they unpack the room and it hits them. They have to turn in their keys. This is the last time they'll be there. It's impactful for them," Galindo-Vargas said. "They have to grieve."

Brooke originally made plans for a spring festival to say goodbye with live music, a DJ and a "last roar" that would bring together alumni, teachers, students and families. Those plans had to be canceled because of the coronavirus.

"It's a little disappointing, I think, for teachers and families who had been with the campus for a long time because there's no real closure," Galindo-Vargas said.

Usually graduating fifth-graders and departing staff get a T-shirt at the end of the year that says "Once a Brooke Lion, Always a Brooke Lion." This year, those T-shirts will go out to every student and staff member, according to Galindo-Vargas.

According to data obtained through an open records request from AISD, 52 Brooke families and 145 Pease families have been approved for transfers for the 2020-21 school year. The enrollment at Pease for the 2019-20 school year is 225, while Brooke's is 289.

Pease is an all-transfer campus, meaning students apply to the school and do not come from one geographic area. Those students will attend school according to where they are zoned next year unless they applied for a transfer. Brooke families, unless they were approved for a transfer from AISD, will be rezoned either Govalle or Linder elementary schools.

Galindo-Vargas said all but about 25 Brooke families have been registered for next year as of May 27. Staff has been working throughout the month, she said, to help families with the process.

AISD has guaranteed staff members at the closing schools positions within the district next year but said information on where staff will be working is not yet available. Both school's principals, Galindo-Vargas and Foss, said they do not yet know where they will be working next year.

Additionally, data will not be available until the fall on how many students or staff members will be leaving the district.

'Tired of being dismissed'

This is not the first time Tovar, who has four children, including two at Brooke, has been through a school closing. In 2012, her oldest son, Juan, was a student at Allan Elementary School when it closed. The location is now the Anita Ferrales Coy facility, which houses AISD's Alternative Learning Center.

Tovar said her son, who now attends Travis Early College High School and is a member of the Junior ROTC at Bowie High School, was bullied in elementary school after the transfer "because everyone knew he was an Allan kid."

However, she has high hopes for her two youngest children's future at Govalle Elementary—the school was recently modernized, and she said the family had positive experiences touring the campus and speaking with the principal. However, she said she cannot shake the feeling the district is ignoring residents on the east side of town.

Three of the four schools set to close—Metz, Brooke and Sims—are located in East Austin and have at least 90% of their students classified as economically disadvantaged.

"It's so frustrating to see just how little value [we are given]. You know what it feels like? Like you're not worth as much because your bank account isn't as big," Tovar said. "I'm so freaking tired of being dismissed."

AISD board members who supported the closures said the changes were necessary to best serve students because closing physical buildings will allow the district to prioritize learning by cutting spending once used to maintain older schools.

"I know we have too many buildings right now, and to me people are more important than buildings," District 7 trustee Yasmin Wagner said on the night AISD closed the schools.

Initially, the district proposed to close 12 schools before cutting that list down to four and tabling the discussion of the other eight. It is unclear how ongoing changes at the district may affect that process. AISD is in the midst of a new superintendent search to replace Paul Cruz, whose last day is Aug. 31.

Additionally, the district's budget could be drastically changed by the effects of the coronavirus. According to preliminary numbers presented by Chief Financial Officer Nicole Conley on April 27, AISD could face a shortfall of $49.3 million, and the district will have to support students differently in the fall.

"We know the kids will come back to the district [after the summer] with new needs," Conley said at the budget work session.

Lugo said she is concerned the ongoing changes could lead to more school closures and more families leaving the district.

Her boys will be attending Boone Elementary School next year. While Henry and Pete are looking forward to it, Lugo said, some other families they know who are thinking of attending Boone are also weighing whether to leave the district to attend private or charter schools. That could mean another potentially difficult conversation lies ahead in an already challenging time.