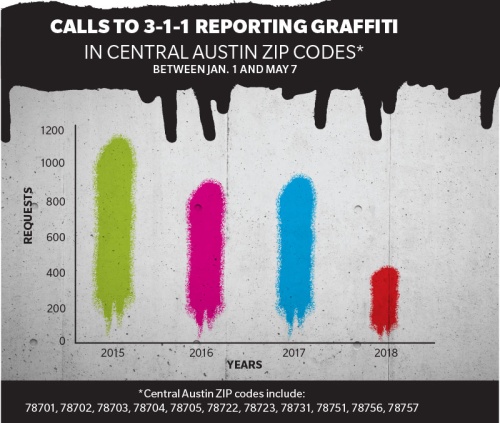 Calls to 3-1-1 reporting graffiti in Central Austin ZIP codes*between Jan.1 and May 7

A year after new efforts began to curb illegal graffiti in Austin, calls to 3-1-1 reporting the marks in Central Austin have significantly dropped, according to a Community Impact Newspaper analysis of city data.

Between Jan. 1 and May 7 there were 423 reports of graffiti to 3-1-1 in Central Austin ZIP codes—less than half the requests made during the same time period in each of the three previous years.

Make Art Not Marks, the multi-departmental project by the City of Austin to address illegal graffiti, began in May 2017 following City Council direction. Referred to as the Graffiti Core Team, the group behind the initiative is made up of staff from a range of city departments—from public safety, transportation and public works to parks and recreation and public health.

Following community engagement, recommendations from outside consultants and studying methods of other cities, city staff say the abatement efforts continue to evolve, with a new focus in 2018 to create alternative avenues for artist expression and property protection.

Austin broadly defines graffiti as a “mark made in any manner on public property that is visible to the public.”

Most graffiti around Austin is done with spray paint and comes from artists who want to express themselves, said city spokesperson Aly Van Dyke.

Austin is known by many for its street art, such as the “I love you so much” graffiti piece on Jo’s Coffee Shop on South Congress Avenue and the “You’re my butter half” mural at 2000 E. Martin Luther King Blvd.Regardless of its artistic nature Van Dyke said graffiti without permission is criminal and remains an issue on public and private property.

“The difference between graffiti and art is permission,” Van Dyke said. “Unauthorized graffiti has implications on property values and safety.”

According to city data, the West Campus and Hyde Park neighborhoods are the most heavily tagged areas in the city. For properties facing The Drag—the stretch of Guadalupe Street that borders the west end of the University of Texas’ campus—graffiti is a regular frustration.

Diana Bishop, manager of Eclectic Eyewear at 2510 Guadalupe St., said graffiti has “trashed” the front facade of the business’s building.

“It’s a pain and it’s frustrating,” Bishop said. “Until you pay to have something replaced you could not understand.”

Bishop said the cost to replace Eclectic Eyewear’s vandalized sign was $3,000. However, she does not report graffiti to the police.

“What do you want me to do? I’m on The Drag,” Bishop said. “I’d rather [the police] use their resources for something more important.”

Detective Brian Robinson with the Austin Police Department said arrests for graffiti are uncommon, as most property owners are like Bishop and choose against pursuing the case.

Through the Neighborhood Partnering Program the city works to install murals in heavily tagged neighborhoods. Van Dyke said the city is trying to designate certain utility boxes as open murals as well.

Another method of prevention is discouragement through swift removal. Van Dyke said part of graffiti’s lure is for artists to have their work displayed to the public eye. Austin recently began a program that has a crew from the Austin Youth Development Program regularly traverse commonly tagged areas and remove it from public property while another crew responds to 3-1-1 requests.

Although Austin code mandates private property owners must have graffiti removed within 30 days, the city currently only provides the paint. However, Van Dyke said the revamping of the city’s graffiti policy is only beginning and further updates to abatement programs are expected later in 2018.
SHARE THIS STORY