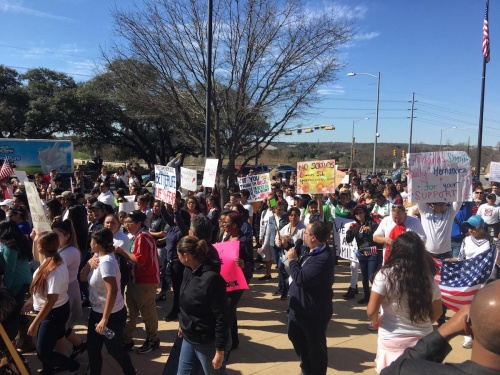 Protesters march to the state capitol during the Day Without Immigrants protest.

Protesters marched along Congress Avenue toward the state capitol Thursday morning during a Day Without Immigrants rally. Austin Police estimates about 300-400 people participated in the protest, which began at Austin City Hall.

Chants like "No KKK, no racist USA, No Trump" and "The people united will never be divided" could be heard during the rally. About 150-200 people have gathered at Austin City Hall to protest a Day Without Immigrants, the grassroots movement started on social media in the last few days.

Protesters chanting "The people united will never be divided" held signs as they prepared to walk to the state capitol from city hall.

Michael Trevino is at the rally supporting his wife, who immigrated from Mexico.

"We're here today to support immigrants, [to] support human rights," he said. "We're here to show love and be with the people, and most importantly, to stand up for my wife and her rights."


"The Austin Police Department’s mission is to safeguard our city," Herber said. "In the spirit of the first amendment, APD ensures a balanced policing approach. " About 150-200 people gathered at Austin city hall Thursday morning during a Day Without Immigrants rally.[/caption]

Austin ISD: Absences on Day Without Immigrants will be unexcused

"Any absences will be treated like any other day," he said in an email.

"This day, and every day, our campuses are learning environments that are caring, engaging, supportive, safe and welcoming," he said. " At AISD, we find strength in our diversity and know that the student experience is enhanced because of the many cultures, ethnicities and backgrounds that make us proud."

Cruz said the district received concerns from families and staff and will continue to provide information "for our campus staff to assist them in better serving our students."

In a letter to the AISD community last Friday, Cruz provided several immigration resources, such as the contact information for refugee and immigration support organizations.

Some teachers took to social media Thursday morning to show how many students were in class.

Normally my class has 31 students.. today there are 12 present. #DayWithoutImmigrants

A self-described peaceful protest will occur at 10 a.m. today at Austin City Hall, around the same time Austin City Council is scheduled to begin its routine meeting.

The rally, which is scheduled to last until 1 p.m., according to a Facebook event post, asks those children of undocumented immigrants to come out in support of their family members.

"Our voices have to be heard, anyone who wants to stand in solidarity with your fellow immigrant brothers and sisters are welcome to attend as well," the Facebook post states.

Torchy's Tacos will be among the many Austin-area restaurants closed today, according to the eatery's South Lamar Facebook feed.

Austin Mayor Steve Adler struck a note of unity in a statement about tomorrow's planned local demonstrations in connection with a national Day Without Immigrants movement.

Word of a national movement calling for people to stay home from work tomorrow is spreading around Austin through social media.

The movement, called Day Without Immigrants, is causing Antonio Acuma to close his East Riverside Drive restaurant Fruttilandia for the day. He said he's closing as a sign of support for the immigrant community in Austin.

"When somebody is doing something wrong to your community, you have to stand up to them," he said.

He'll spend his day off at an Austin rally, of which the details have not yet been revealed, where he will "let our governor know that our community is very, very important to the city economy."

He said he credits the Mexican-American immigrant community in Austin for some of the sushi he's learned to make at Kyoten Sushiko.

"[Immigration] has no direct effect on my business, but nevertheless, I wouldn't be here without having wonderful mentors from the Mexican-American Austin immigrant community."

Community Impact Newspaper will update this story regularly as new information is received.
SHARE THIS STORY