After nearly getting into the smoothie business, Bird Bird Biscuit owners have found a niche with comfort food

The Queen Beak (left, $9) is available all day and is made with a fried chicken breast, cayenne black pepper honey and bacon-infused chipotle mayo. The firebird ($10, dinner-only) is a hot chicken sandwich with goat cheese and dil aioli, spicy sweet pickles and cilantro. (Jack Flagler/Community Impact Newspaper)

When you hear Bird Bird Biscuit owners Ryan McElroy and Brian Batch tell the story, the success of the Manor Road biscuit shop two years into its existence is partly a product of happy accidents.

McElroy owns Thunderbird Coffee, and the two future biscuit shop owners became friends after Batch started working as a barista at Thunderbird in 2008, then worked his way up to management. They were originally going to go into the smoothie business, with a place called Batch Coffee and Juice Bar.

But when Batch Craft Beer and Kolaches opened just down the road in East Austin, they pivoted from the name—and also tinkered with the idea. Eventually they landed on biscuits, a product they see as unique within the Austin dining scene.

“A lot of things came together at the right time,” McElroy said. “That’s a great example of bad luck that turned out to be good luck.”

They settled on the name Bird Bird Biscuit, a variation of Thunderbird, and opened in 2018. Their building at 2701 Manor Road had a window attached, but the restaurant never used it—the window remained screwed shut for more than a year.
RELATED STORIES

In March, when restaurants shut down dine-in service due to coronavirus restrictions, an employee came to Batch and McElroy with an idea: open up the window, serve customers from there and switch to a takeout-only model.

That story is an example of what has made Bird Bird successful, Batch said. There has been some luck involved, but it is the relationship building that has really been the key. The business started out of a friendship between Batch and McElroy, and Batch now sees the restaurant as an opportunity to help other employees grow into new opportunities.

“You meet so many great people; if you can get those people on board with your vision and grow with them, that’s when you can do something special,” Batch said. 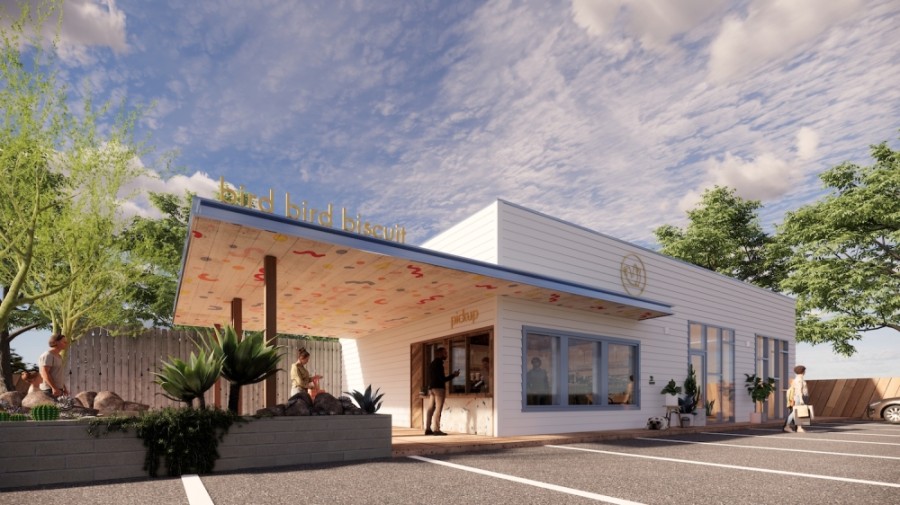 The former Thunderbird Coffee at 1401 Koenig Lane is set to become the second location of Bird Bird Biscuit by the middle of 2021.

McElroy said the grab-and-go nature of Bird Bird and the unique product it can offer in the Austin food scene make it a better fit for the Crestview space, which closed in late July.

However, McElroy said the original Thunderbird at 2200 Manor Road is not going anywhere. That coffee shop, which opened in 2006, is open daily from 7 a.m.-7 p.m.