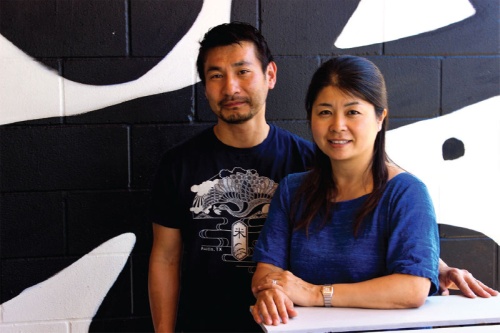 When Kayo and Takehiro Asazu met in Austin in 1996, they missed the food they used to eat at home.

Kayo grew up in Kobe, Japan, while Takehiro lived in Osaka—two cities in the Kansai region of the country separated by just a few miles and known for their food culture.

“When you say you are in Osaka in Japan, you are in the right place to eat,” Kayo said.

“The first business was serving bento boxes at the farmers market. At the stand in a 10-by-10 tent every Saturday,” Takehiro said.

Three years after starting the business at the farmers market, Kayo and Takehiro expanded to a food truck called Sushi-a-Go-Go on Barton Springs Road. In 2011 they opened their first restaurant—Komé.

While the Komé menu features staples such as sushi rolls and bento boxes, it also offers a taste of Osaka—the dishes Kayo and Takehiro missed when they first arrived in the U.S. in the 1990s.

Dinner offerings include takoyaki, an octopus dumpling, and omu-soba, a pan-fried noodle and egg omelet dish made with squid and julienned vegetables that are staples of Osaka street food. The menu also includes okonomiyaki, a seafood pancake popular in the Kansai region, and tonpei-yaki, a pork and cabbage omelet made from Kayo’s mother’s recipe.

Kayo and Takehiro began expanding their business in 2013 when they opened Daruma Ramen downtown and partnered with longtime friend and East Side King part-owner Motoyasu Utsunomiya to open coffee shop Sa-Tén.

Kayo said the coffee shop idea started as a joke between her and Utsunomiya until a space opened on Springdale Road.

“I called him up and said, ‘Hey were you just joking or are you for real? Because I found a space.’ He was like, ‘OK. Right on.’”

“We still enjoy introducing new stuff. Not new to us but new to the people here in Austin,” Kayo said.