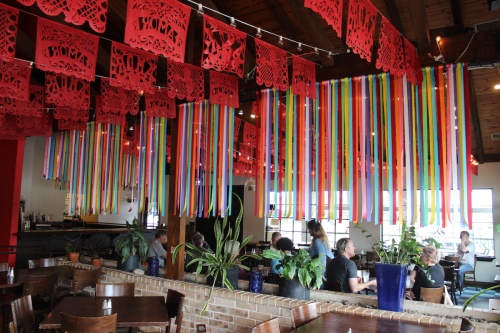 Growing up in Mexico City, Marisela Godinez was exposed to a wide variety of regional Mexican cuisine.
Her father traveled around the country for work, bringing home new recipes for her mother to try. Some of them were unfamiliar, such as paella inspired by a trip to Baja California.

“We wanted to share that experience,” Godinez said of the decision to open her own Mexican restaurant, El Mesón, in Austin. “This is a real Mexican home you’re eating at.”

Godinez and her husband broke into the Austin restaurant scene in 2000, when they opened the original El Mesón in Southeast Austin.

The taqueria, which served traditional Mexican stews—called guisados—in homemade tortillas with minimal accoutrements, was ahead of its time, Godinez said.

Customers wanted plates, not baskets, and expected sides of rice and beans.

“Austin wasn’t ready for it,” she said, although the restaurant remains open.
In 2010 she and her husband opened a second El Mesón with table service and plates, drawing on their years of experience working in the local restaurant industry.

Despite these upgrades, Godinez remains committed to a traditional style of Mexican cooking.

“It’s very humble and more like the normal food that ... your mom would cook,” she said of El Mesón’s menu, which focuses on seasonal ingredients and everyday fare.

Godinez has modernized in other ways, however.

“The Austin restaurant industry has changed so much in the last 10 years, even the last five years,” she said.
When the second El Mesón opened, hardly any restaurants in Austin served Sunday brunch, Godinez said. Now, it is her favorite meal to serve.

“It’s my baby,” she said of her brunch menu, which includes paella.

Godinez has also incorporated social media into her business strategy, attracting customers from as far as Cedar Park with Instagram posts.

“I have a younger crowd that I didn’t see before,” she said. “You can see them taking pictures—it’s the thing to do.”

El Meson’s grand dining room is both homey and photogenic.

“It’s a constant struggle, keeping up with the way the city is changing,” Godinez said. “But we really love what we do and put a lot of passion into it.”