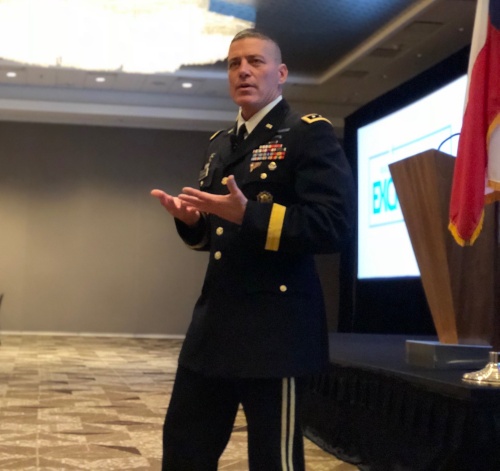 According to one of the leaders within the new Army Futures Command, the brand new command located in Austin will have a mission greater than delivering high-tech weapons to the military.

Lt. Gen. Paul Ostrowski, the command’s director of combat systems, said the command will aim to integrate resources in the Army under one roof, help keep the U.S. safe from cyberattacks from countries like Russia and China, and allow the Army to move away from its previous standards of business that were “laden with bureaucracy.”

Before the arrival Army Futures Command, Ostrowski said, the process to execute a contract with a company could take up to four years.

“Companies turn their noses at us, and understandably so,” Ostrowski said. “We can’t allow that as we go forward.”

Ostrowski spoke to hundreds of commercial real estate and business professionals Tuesday at the J.W. Marriott hotel in the Real Estate Council of Austin’s annual RECA Exchange. According to Ostrowski, the research and development budget of the U.S. Army, which the Army Futures Command will be in charge of allocating, has risen from $26.8 billion in 2017 to $32.46 billion in 2019.

The increase in resources to modernize the Army and a new mindset to connect with entrepreneurs in the private sector will better prepare the military to keep up with competitors like Russia and China, Ostrowski said–countries that he said are taking advantage of flaws in U.S. cybersecurity defense gaps.

“I will tell you they are outspending us,” Ostrowski said. “The point is that they pay their people less, but they’re investing more, so that’s a double whammy in respect to where we find ourselves.”

Army Futures Command began operations Aug. 24 after the Army selected Austin from a list of 150 initial cities that was later whittled down to five finalists.

The new command is the first created since 1973 when the Army created the Training and Doctrine Command and Forces Command in the aftermath of the Vietnam War.