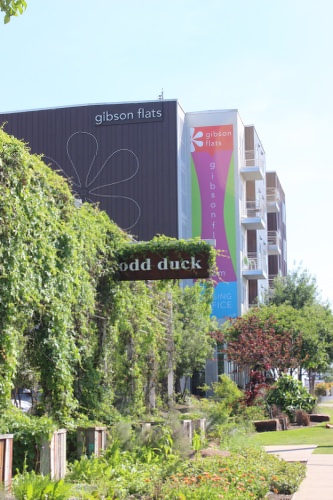 In 2006 the city of Austin approved vertical mixed-use, or VMU, zoning along some of its major transit corridors to accommodate rapid growth.

The goal was density—of housing supply, transit opportunities and uses.

“Mixed-use” refers to the combination of two or more of the following uses—residential, commercial or office—in one building.

Since 2006 at least 10 such VMU developments have sprung up along Lamar Boulevard. Other mixed-use hubs include Burnet Road, East Seventh Street and South Congress Avenue.

“Mixed-use is a catch-all,” said Britt Morrison, Senior Vice President at Weitzman, which opened Austin’s first such project, The Triangle, in 2008.

“It doesn’t have to be a complete 700-acre airport redevelopment,” such as Mueller in East Austin, Morrison said. “It can be a single building.”

Despite this flexibility, mixed-use in Austin is limited by the city’s land-use code, which is being rewritten through the CodeNEXT project, and neighborhood associations, which work to contain density along transit corridors.

Still, many in the development community believe the trend of mixed-use has only just begun.

“People are moving here, and we can either develop responsibly or we can continue with the same [urban] sprawl we’ve had for 60 years,” said Clinton Sayers II, a partner and broker at Sayers Real Estate Advisors.

A brief history of development

“The U.S., for the most part, has grown up around this single-use mindset ... where one has to get into their car to do anything,” said Jamil Alam, managing principal at Endeavor Real Estate Group.

This mindset developed after World World II, when economic prosperity and infrastructural development encouraged many Americans to purchase single-family homes and personal automobiles.

As it has in other growing cities, urban sprawl in Austin led to traffic congestion, overextended utilities and astronomical property values.

In response, the city has moved to incentivize dense, mixed-use development, which increases the housing supply, allows for shared space and utilities, and reduces the need for cars.

Dave Piper, president of the Zilker Neighborhood Association, has lived in Austin for 16 years.

“Change is going to happen,” he said. “We try to get the best change we can.”

For the ZNA, Piper said this means working with the city and developers to identify appropriate lots for mixed-use projects along transit corridors and not in neighborhoods, limiting late-night alcohol sales and live outdoor music, and ensuring the provision of adequate parking and street improvements.

“We’d rather see [developers cover these costs] than taxpayers pay for it,” Piper said.

The ZNA is one of dozens of neighborhood associations in Austin. The Austin Neighborhood Council, which is composed of representatives from these different associations, has been a vocal opponent of increasing density.

“Every time your attitude keeps somebody from living in the city, it’s pushing them to the periphery and creating congestion,” he said.

While neighborhood associations have successfully opposed some mixed-use projects, they have also worked with developers to achieve mutually satisfactory results.

“We do have very involved neighborhoods that participate along the way” as developers apply for zoning and site plan approval from the city, Sayers said. “The most successful developers respect that and know how to work with neighborhoods in a professional fashion.”

Mixed-use projects offer multiple revenue streams that are often complementary, according to the developers and brokers interviewed for this story.

For example, a building with retail and residential uses can share a parking garage because customers and residents typically have opposite schedules.

“It helps the developer lower the cost, which you can then pass onto the customer,” Alam said.

As the shopping mall and big-box store struggle to stay solvent, mixed-use presents an opportunity.

Ground-floor retail often benefits from the employees or residents above, who need places to grab lunch, buy a gift, exercise or meet for dinner, many developers said.

The retail, in turn, helps turn the development into a destination.

“In some cases they may not even be the primary revenue stream [for a mixed-use project],” Sayers said. “But they bring the brand and the vibe and the traffic and make it a place where people want to be.”

Morrison pointed out that many mixed-use developments are identifiable only by their ground-floor retail.

Weitzman manages and operates out of the mixed-use building at 4200 N. Lamar Blvd., which everyone knows as the Tacodeli building, he said.

Mixed-use projects also present challenges, such as finding successful tenants and a reliance on foot traffic.

Since 2017, four restaurants have closed at Lamar Union. There are vacant retail spaces at 3800 N. Lamar Blvd., where Kendra Scott is headquartered; at the Triangle; and in the 2nd Street District, among others.

According to Black, mixed-use development will discourage Austinites’ dependence on cars. Until then, however, such projects may suffer until Austin becomes a truly dense, walkable city.

So long as the speed limit along transit corridors such as Lamar remains as fast as 40 miles per hour, developments along that corridor remain what Black called “mixed-use islands.”

“Unless you have that across-the-street energy, you’re going to have a problem,” he said.

Despite these issues, those on all sides agree that mixed-use is here to stay.

According to the Texas Demographic Center, by 2040, the Austin metro is expected to nearly double in population—to almost 4 million people.