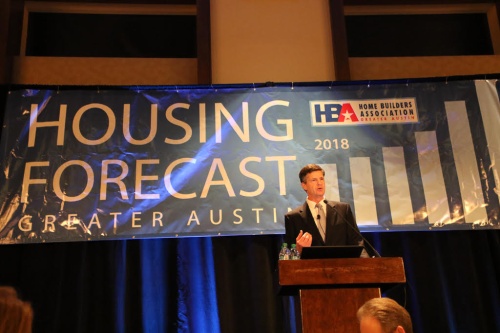 The Austin real estate market is poised for another strong year despite the threat of rising mortgage interest rates and building costs, according to the Home Builders Association of Greater Austin.

Housing and economic experts presented their analysis of the local housing market, including the state of the regional labor market, buyer expectations and housing supply trends, to more than 600 industry professionals at the HBA’s 2018 Greater Austin Housing Forecast on Jan. 31.

Austin’s appeal to the tech sector is critical to its growth, much of which is driven by the flow of tech workers to the city, said Eldon Rude, principal of 360 Real Estate Analytics.

“Austin is so much a part of the national and global economy because of what it sells [tech services],” Rude said.

Despite uncertainty about the impact of the new tax plan and concerns about possible rising interest rates, Greg Hallman, a senior lecturer in real estate finance at The University of Texas at Austin, said both the national and global economies are doing better than they were last year. As a result, he said he expects the GDP to grow 2-3 percent in 2018, which will boost consumer confidence.

“Supply and demand works in this business,” Hallman said of the real estate industry.

One driver of demand is low supply, which is an issue in Austin, Rude said. Despite significant development, especially in South and East Austin, there has been less than four months’ worth of housing inventory for the past four years, according to Rude’s analysis.

Data also shows that low supply drives up cost. The average home resale price in Austin reached an all-time high of $362,000 at the close of 2017, according to data from the Texas A&M Real Estate Center. This represents a year-over-year increase of 5.4 percent.

Builders take on some of these costs in the form of increased lot prices, according to Rude. Coupled with a persisting labor shortage, builders will be scrambling to keep up with demand, he said.

The industry’s task in 2018 is to balance rising costs with what consumers can afford, Rude said. He said he expects construction to begin this year on 17,000 single-family homes, an increase of over 5 percent compared to 2017.

To assuage costs, Rude said he expects builders will be on the prowl for lots that cost less than $300,000 and that are located in sub-markets, such as Southeast Austin and Liberty Hill in Williamson County, away from the expensive urban core.

“Housing affordability will continue to be a challenge for the Greater Austin market for the foreseeable future,” HBA president Lee Whitaker of building company Pacesetter Homes said.

Despite the healthy forecast for 2018, Hallman and Rude agreed that this growth can only continue for a limited time.

“At some point in time, there will be a shock to the system,” Rude said. "Bottom line: planning is easier than forecasting."