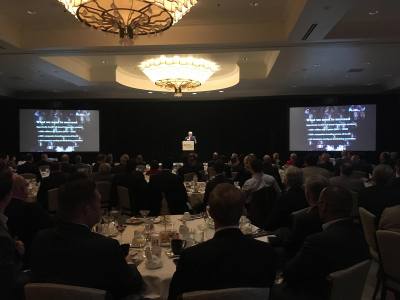 The Greater Austin Chamber of Commerce unveiled a plan Wednesday to create more than 160,000 new jobs, increase the average annual wage to $66,000, reduce the poverty rate to 9.5 percent and help 56.6 percent of Austinites attain at least an associate degree.

The chamber laid out the details of its latest five-year economic development platform, called Opportunity Austin 4.0, at its quarterly investors meeting on Dec. 13 at the Four Seasons Hotel downtown.

To achieve this, Opportunity Austin, the chamber’s economic development initiative, intends to fundraise $30 million by December 2018.

“As we know, economic prosperity for all takes a lot of money,” Vice Chairman of Economic Development for the Austin Chamber Kerry Hall said at the event. “This would be a terrible time for complacency.”

Since 2004, when the Austin Chamber introduced its Opportunity Austin initiative, the city has seen remarkable growth. More than 860 companies have expanded, and 515 have relocated to Austin. Per capita annual income has increased nearly $9,500, and the poverty rate has fallen 2 percent.

“We have been the envy of the nation over the last 13 years,” Opportunity Austin 4.0 Chairman Gary Farmer said. Farmer is also the president of Heritage Title.

But he is concerned that city officials are becoming complacent when it comes to continuing this growth.

“The truth is we’ve been so successful that some elected officials think we don’t need economic development” programs, Farmer said, mentioning that some businesses have left Austin because the cost of compliance and burdensome regulations have outpaced the city’s benefits.

Austin’s biggest challenges when it comes to economic development are traffic, affordability, burdensome city regulations and income inequality, according to Farmer.

The Opportunity Austin 4.0 platform intends to address some of these barriers by focusing on existing businesses, which are the source of 80 percent of new jobs, and strengthening the Austin workforce through college and career placement programs, which will, in turn, help support expanding companies.

Although the city “absolutely needs efficient, effective mass transit,” Farmer said, Opportunity Austin’s No. 1 priority is to advance road construction. He also mentioned a desire for more mixed-use developments such as The Domain, where people can live, work and play without needing to drive.

Most recently, the city has explored a potential paid sick leave policy, which, if implemented, would require all private employers to offer earned sick pay.

This is the type of “regulatory obstruction” the chamber needs to “push back against,” Farmer said. Instead, the city should focus on increasing density and creating incentives for more volume and more varieties of housing as a means of making Austin more affordable without imposing additional burdens on businesses, he said.

The previous iteration, Opportunity Austin 3.0, had a fundraising goal of $25 million for its five years of operation, from 2014 to 2018.

Between 2019 and 2023, Farmer is adamant that the city needs to sharpen its focus on economic development in order to avoid the boom-and-bust cycles that have marred Austin’s past and led to a citywide recession in the early 2000s that prompted the creation of Opportunity Austin.

“If we want this program to be successful,” he said, “we need 30 million bucks.”
SHARE THIS STORY