East of the highway divide, Austin's next residential boom is on the horizon 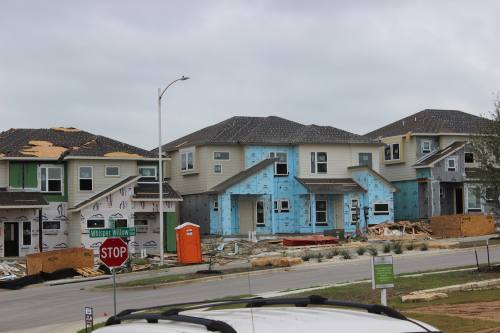 Single-family developments are sprouting up at a rapid pace east of I-35—especially along the US 183 and SH 130 corridors.

Developers are being enticed to the areas east of I-35 because they are able to offer lower price points than in the urban core and because of its proximity to downtown Austin relative to traditional suburban housing markets.

With the amount of building underway, far East Austin will likely see a population explosion in the coming years.

“We are tracking some of these emerging projects, and … there may be another [20,000] to 30,000 houses 15 to 20 years from now [in East Austin],” said Martin Barrera, redevelopment project manager for the city of Austin. “We do get the feeling that this is considered far east currently, but when there’s product on the ground ... it may not feel like this is that far out.”

Experts say the growth is largely driven by the demand in Austin for housing stock that is attainable for Central Texas families.

The median-valued home in the city proper—about $361,000 according to the latest figures—is often out of reach for the typical family of four residing in the area, which has a median annual income of about $81,400.

In contrast the median home price in the East Austin market in the third quarter of 2017 was $255,990, according to analysis by Metrostudy. And many builders are advertising home prices starting in the low $200,000s, said Vaike O’Grady, Austin regional director of the housing industry analytics firm.

“I think people’s expectations were that you could get [a nice] home in Austin in the mid-[$200,000s],” O’Grady said. “That’s no longer the reality in many of the markets. Builders have been successful on the east side in delivering product at that price point. Given the median income in Austin, that mid-$200s is the sweet spot.”

In addition to being more affordable than homes in the urban core, the East Austin housing stock is in abundance compared to the continually parched markets to the west.

At the end of the third quarter there were 661 single-family homes in stock on the east side: 167 townhomes, duplexes and triplexes; and 327 condominiums. The single-family housing stock is higher than it has been in any quarter in the past three years, according to Metrostudy’s numbers.

In the third quarter, the number of new housing starts—or newly constructed homes—was up  43 percent year over year in East Austin. Annual closings are up 9 percent.

Another figure Metrostudy tracks is vacant developed lots. These are the number of parcels of land that are ready for new home construction—they have the road and utility infrastructure needed; it is just a matter of a builder going vertical.

At the end of the third quarter, the number of vacant developed lots in the East Austin housing market was up 140 percent year over year. More than 20,000 lots are primed to have homes on them in the future, according to Metrostudy’s data.


“US 183 is rapidly becoming what I-35 was in the ’50s—the division between rich and poor. The market itself won’t be able to reverse problem.”

Among the new developments are several master-planned communities collectively bringing thousands of acres of new neighborhoods to largely east of the city limits.

Whisper Valley, across from Walter E. Long Metropolitan Park off SH 130, began construction on the first of its eventual 7,500 homes earlier this year.

Douglas Gilliland, president of Taurus of Texas, which is developing the community, said it took a while for Whisper Valley to come online.

Purchased in 2006, the land was not served by any water or electric utilities. Through the city, which authorized the creation of special district called a public improvement district, Whisper Valley was able to finance the construction of utility infrastructure with local government bonds. Homeowners in the community will pay for those improvements in their annual taxes.

In addition to being a PID, Whisper Valley is also a PUD—or planned unit development. PUDs help the city control land use, especially key in developments such as Whisper Valley that are outside the city limits where zoning is scarce. They also put measures in place so that developments that use the mechanism dedicate enough land to open spaces and reserve some space for affordable housing.

Gilliland credits city leaders for predicting demand for housing east of I-35 would rise.

“The city had a lot of vision in seeing that the future of its tax base was coming to the east side,” he said.

Other new or upcoming single-family neighborhoods along the US 183 and SH 130 corridors include Sun Chase, Easton Park, Goodnight and WildHorse.

One of the earliest developments to emerge in this new wave of residential construction east of US 183 was Agave.

The East Austin lifestyle—with its economic and cultural diversity as well as eclectic sensibility—appealed to Erin Knox nine years ago when she moved from the South Congress area and bought a home in Agave.

Now the president of the Agave Neighborhood Association, Knox said Agave was one of the first to offer a modern design aesthetic that she and her husband were looking for.

Although she said the east side is more affordable than in the urban core, the housing market currently can be difficult for a homebuyer—it can be hard to negotiate when one is competing against several offers in the in-demand market. When squared with the fact that far East Austin lacks access to some of the services other areas enjoy, the pricing seems high, she said.

But she said developments, such as the master-planned Colony Park—a Mueller-inspired development that will sit across the street from Agave and comprise a mix of land uses—will be catalysts for the area. The city of Austin has issued a request for proposals to develop the 208-acre parcel of publicly owned land.

Another attractive feature of East Austin is the location—both for its proximity to the city and its natural beauty, Knox said. She said there is nothing like watching the sun set behind the Austin skyline.

“Really and truly you’re 15 minutes away from everything, but there’s still a bit of space,” Knox said. “I still hear the crickets chirp at night. I know my neighbors really well. There’s a good balance between nature and feeling close enough to the city.”

With a wealth of new development money pouring into East Austin, area leaders have an eye on resources for the traditionally underserved east side.

Food scarcity, poor road infrastructure and a lack of public transit access are among the service deficiencies facing the area of historically low-income, black and Hispanic populations.

Council Member Ora Houston represents part of the area in which new housing developments are emerging. The addition of 30,000 residents in her District 1, according to projections in the city’s land development code rewrite, would be irresponsible without needed infrastructure improvements, Houston said.

“The majority of [District 1 residents] are required to leave the district to work, go to a restaurant after work, take in a movie, drop their clothes at a cleaners, see their doctor, and—by the way—the majority of the individuals must own a vehicle or use a ride-for-hire service,” she said.

Travis County Commissioner Jeff Travillion said he plans to work with local government leaders; developers; and Capital Metro, the regional transit provider, to bring more access to public transportation to his East Austin constituency. Travillion said Whisper Valley has plans to dedicate 5 acres to bus services. The community, just southeast of the city of Manor, is set to include affordable housing.

The commissioner said although the Austin housing market is one of the most expensive in the state and the city one of the most economically segregated communities in the country, he aims to reverse some of those negative trends—through public policy.

“US 183 is rapidly becoming what I-35 was in the ’50s—the division between rich and poor,” Travillion said. “The market itself won’t be able to reverse problem.”

But he said he is hopeful more affordability will come to the area.