Austin Public Health: herd immunity could be in sight

Austin is on track to make herd immunity against COVID-19 a possibility, Austin Public Health authorities said during a May 11 briefing to Austin City Council and the Travis County Commissioners Court.

APH data indicates that around 70% of Travis County residents have some antibody protection from COVID-19, either from a previous infection or vaccination. APH said 38% of local residents are fully vaccinated against coronavirus, and 13% have received their first dose of a vaccine. While only 6% of the county has had a confirmed case of COVD-19, APH estimates that another 13% have had infections that went unreported. 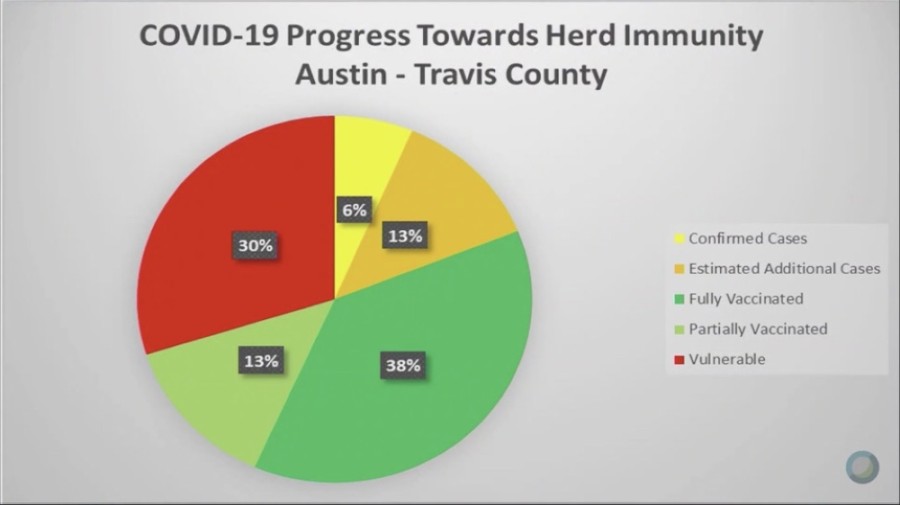 "This puts us at an important point," said Mark Escott, who was recently named Austin's Chief Medical Officer after serving as the city and county's interim health authority since 2019. "We may start to see some significant changes when it comes to disease trend as other jurisdictions have seen been at a similar point."

APH has used 67% immunity as the minimum benchmark needed to approach herd immunity—the status at which the population will have collective protection against the virus. Other health authorities, such as National Institute of Allergy and Infectious diseases director Dr. Anthony Fauci, have estimated a higher threshold of up to 85%.

Some experts have also recently expressed skepticism that herd immunity on a nationwide level remains a possibility, including Dr. Lauren Ancel Meyers at the University of Texas' COVID-19 Modeling Consortium. She told Nature in March that she was "moving away from the idea that we'll hit the herd immunity threshold and the pandemic will go away for good," although a high vaccination rate will help the virus to recede.

However, communities who have approached herd immunity estimates have seen a marked difference in infection rates, Escott said including the widely-vaccinated nation of Israel, and more locally, the city of El Paso.

"[El Paso] had a 50% drop in new COVID cases after they exceeded 50% of the population vaccinated," he said.

In order to give Austin the best chance at herd immunity, Escott urged parents to sign their eligible children up for vaccinations. While access to the Moderna and Johnson & Johnson vaccines remains limited to adults, the U.S. Food & Drug Administration expanded authorization of the Pfizer vaccine to include children 12 and up on May 10.