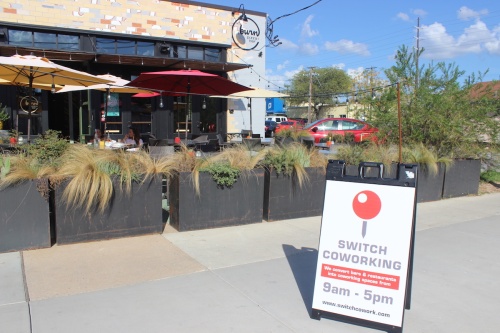 Switch Coworking, which uses unused restaurants as a coworking space during the day, launched this week.

On any given afternoon, many Austin bars and restaurants are empty until they open for dinner service or evening drinks.

Entrepreneur Christa Freeland is trying to make use of that underutilized space by co-creating Switch Cowork, a company that outfits local bars and restaurants with the working amenities freelancers, young companies and nonprofits need to work remotely.

Freeland and co-founder Jacob Morin launched their company Monday out of restaurateur Bridget Dunlap’s Burn Pizza + Bar at 1802 E. Sixth St., Austin, offering a free week of co-working to get the word out.

Freeland, a 2010 Texas State University graduate, said Dunlap offered up Burn as the pilot for the Switch concept in the hopes that sales increase when members get hungry after co-working ends and the restaurant service begins at 5 p.m. daily.

“If you were to get a membership with us, you’re also supporting the local community and doing business with other entrepreneurs,” Freeland said.

As part of the partnership, Switch offers the restaurant a share of the revenue, and Switch members receive 15 percent off Burn’s food when the restaurant is operating.

Complimentary coffee and cold brew is provided, along with WiFi, free parking and your choice of “desk” space—the various tables, high-tops and booths throughout the restaurant.

Switch will ultimately charge $20 for a day pass and $99 for a monthly pass.

Freeland said if the pilot project goes well—and she can prove the participating restaurant benefits from hosting Switch’s members—she hopes to expand to some of Dunlap’s other restaurants, including the newly opened Trackside at 507 Calles St., and other places such as The Roosevelt Room, a downtown craft cocktail bar, event space and music venue at 307 W. Fifth St. Switch members would have access to any of the restaurants’ co-working spaces. Freeland, who is also a member of the leadership team at Austin-based Powershift Group, a startup studio led by career technology entrepreneur Steve Papermaster, said she was working on a networking app for young professionals—she described it as “Tinder for networking”—when Morin, who she met at a technology startup networking event about three years ago, pitched the idea of creating a coffee shop exclusively for co-working.

Freeland said that idea might be too ambitious to start, so the two began brainstorming and thinking about friends who own bars and restaurants that sit empty during the day.

“We knew that there was something there because the community element of co-working is such a big deal. People want to find a place to plug in but also meet people,” she said.

As of Friday, Freeland said she had 17 people signed up for a Switch membership.

“I think we’re on to a major disruption,” she said, comparing the Switch concept with businesses such as Airbnb and ride-sharing companies.

Freeland said Switch is part of a movement that is disrupting the “gig economy”—in which people are dropping the traditional working model for freelancing, startups and an “autonomous lifestyle”—and the “shared economy” in which people are opening up their spaces and using them in different ways.

Freeland is currently gathering interest from investors and hopes to expand beyond Burn by the end of the year.