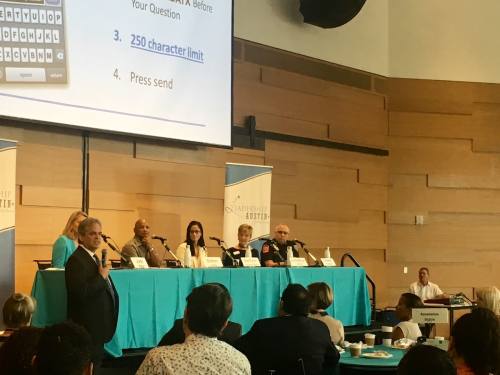 Following the death of his daughter, Dalton Duffie said he lost perspective on life and turned toward drugs. Years of deepening addiction culminated with him ending up on the streets, caring less, he said, about whether he would live to the next day and more about whether he could get high in the next moment.

Today, Duffie is a resident of and on the board of directors at Foundation Communities, a local nonprofit focused on building and providing deeply affordable housing to the community’s most vulnerable residents. Duffie’s work focuses on housing, more of which, leaders have said, is the key to the city’s homelessness challenge; however, Duffie said had mental health and substance abuse services been more accessible, he likely would have spent less time suffering on the streets.

“At some point, all substance abuse users think about treatment, but you can’t get to it if you have to pay thousands of dollars for it,” said Duffie, who got clean over the course of more than two years with a limited program at the Salvation Army. “All of the people I knew who were substance abusers had no way to pay for treatment. If there were more [programs like the Salvation Army’s], more people would use them.”

On Sept. 11, Duffie joined Darilynn Cardona-Belier, a mental health specialist with Travis County Integral Care; Caritas Austin Executive Director Jo Kathryn Quinn; and Ernesto Rodriguez, Austin-Travis County EMS chief, in front of a sold-out crowd for Leadership Austin’s discussion on homelessness as part of the nonprofit’s Engage Breakfast Series. Austin’s homelessness challenges have taken the spotlight in recent months, and Erin Osenbaugh, a manager with Leadership Austin, said it was only the second time they had ever sold out an event.

The early morning discussion at the Austin Central Library touched on a range of topics related to local homelessness challenges; however, when asked to touch on where the gaps were in the community’s response to the problem, the expert panel agreed the gaps were in mental health and substance abuse services.

“Access to mental health and substance abuse treatment should be as easy, [as] without barriers, as it is for someone to obtain drugs,” said Cardona-Belier, who, with Integral Care, focuses most of her time and resources on responding to the behavioral and mental health needs of the county’s homeless and other vulnerable populations. “That system in our community does not exist.”

Cardona-Belier said Integral Care has increased its staff from five to 100 over the last five years to address the surge in the indigent population’s mental health needs throughout the county. However, she said, the staff is still overwhelmed by the growing demand. Since 2014, Integral Care’s client base has jumped by 50%.

“There isn’t enough mental health care available,” Rodriguez said. “Most [homeless] individuals have chronic illnesses, addiction and mental health issues. When you look at all those things combined, it becomes very difficult to help someone through their circumstances.”

Cardona-Belier said the city needs to approach mental health with the same gusto it uses to address housing shortages. Duffie said all levels of the community need to make mental health care a priority again.

“I just don’t know what has happened to our nation that we have turned so many mentally ill people out and put them out on the street,” Duffie said. “There are people out there who don’t know what their names are. Those people have no way of making it, day to day, and we leave them out there on the street. People with mental health issues cannot fend for themselves. Once you start going down that dark hole, there is almost no way to pull yourself back out.”