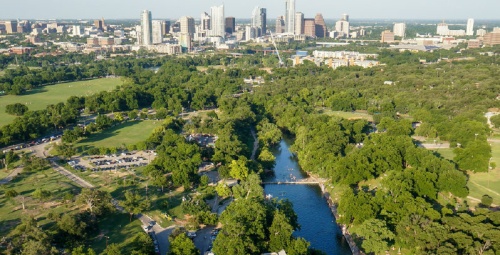 According to a new timeline released by Austin City Manager Spencer Cronk’s office, Austinites can expect to see the first draft of a new land development code and revised zoning maps by Oct. 4.

The new timeline, released earlier this week, marks the first news about the city’s ongoing effort to rewrite its land development code—the rules governing what can be built and where within Austin’s bounds—since City Council provided policy direction for the effort in May.

Public hearings on the new code and zoning maps are scheduled to begin by Oct. 26, with a first vote from City Council planned for “early [December]” according to the timeline.

The city has been working to rewrite its land code since 2012, when the community, in drafting the city’s 30-year comprehensive plan dubbed Imagine Austin, agreed an overhaul was needed in order to manage its rapid growth and create a walkable, accessible and sustainable place. The last major revision happened in 1984.

Since agreeing a revision was needed, the community has come together on little else regarding the code. During its roughly 6-year, $8.5 million effort the city called CodeNEXT, stark political lines were drawn throughout the community between those who supported the proliferation of a more dense, urban environment, and those who wanted to preserve the existing physical character of Austin’s legacy neighborhoods.

In August 2018, during what marked CodeNEXT’s homestretch, City Council, feeling the polarized pulse of the community, voted to shut down the effort and start anew. They passed the buck to new City Manager Spencer Cronk, and tasked him with drafting a new process.

At Cronk’s request, City Council in May voted on specific policy direction for what Cronk considered CodeNEXT’s most divisive issues: the scope of the rewrite, the level of housing supply, proliferation of housing types, compatibility requirements and parking minimums. City Council said the new code should make room for 400,000 new units—which they deemed enough to realistically yield 135,000 new units over the next 10 years per the city’s strategic housing blueprint—encourage smaller scale, multi-family housing construction and reduce parking requirements.

Among the more polarizing aspects of CodeNEXT was the city’s heavy reliance on the California-based consulting firm Opticos, which led the drafting process. This time around, the city manager has assembled a team made almost entirely of city staffers, led by Assistant City Manager Rodney Gonzales, assistant transportation director Annick Beaudet and land use attorney Brent Lloyd of the city’s development services department.

However, the city has chosen to retain Peter J. Park as a consultant. Park was on the front lines with Opticos during the CodeNEXT process.

By request, city staff will be hosting meetings in each of the 10 City Council districts between now and November.
SHARE THIS STORY