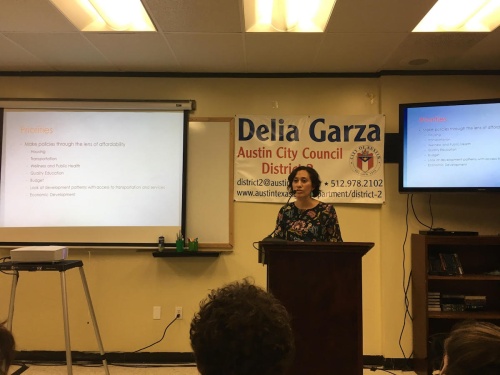 Delia Garza speaks to her constituents at District 2 town hall meeting in 2017.

Although Austin Mayor Pro Tem Delia Garza has not decided whether to enter the race for Travis County attorney, a draft campaign launched July 18 shows growing support for a potential run by the Southeast Austin District 2 city representative.

Led by District 4 Council Member Greg Casar and local activist Martha Cotera, a group called Progress Justice Now officially filed paperwork launching a campaign aimed at recruiting Garza to the Travis County attorney race, according to press release. The seat, long held by David Escamilla, will be vacated after Escamilla retires at the end of next year. Casar said the campaign was launched without Garza’s direction or permission.

Along with several members of the local state delegation, a majority of City Council signed on in support of Garza entering the race, including Austin Mayor Steve Adler and Council Members Casar, Ann Kitchen, Jimmy Flannigan, Pio Renteria, Natasha Harper-Madison and Paige Ellis.

Garza, who was in Mexico on July 18 with the Greater Austin Hispanic Chamber of Commerce, said she is “seriously considering” a run at the Travis County attorney seat but is still weighing her options.

“Right now, my focus is serving my constituents and the city as mayor pro tem,” Garza said via text message. “I am interested in continuing to pursue public service where I can have the biggest positive impact for the community. Fighting for reforms and improvements to the social justice system would be a natural transition for me after my work to reform most of the systems I’ve been a part of.”

The draft campaign is a way to launch early support for a candidate prior to an official announcement to run. If Garza, who said she was considering a run earlier this year, announces a run before December, she would have to vacate her City Council seat, and the city would hold a special election in May to fill the rest of Garza’s term, which expires at the end of 2020. Should Garza announce after December, she would be able to serve out her full term on City Council and campaign for the county attorney position.

“The next Travis County Attorney should have a proven track record of fighting against the status quo and against mass incarceration," Casar said in a press release. “Delia and I have worked together to reduce needless jailings for things like marijuana possession and driving with a bad license. Instead of spending countless dollars incarcerating people for small offenses, we can dedicate resources to providing housing, mental health services, and jobs to those who need them. We can focus limited dollars on stopping serious crimes like sexual assault.”

Garza said she “greatly” appreciated the encouragement and would “weigh what’s best for my family and the residents of Travis County” as she makes her decision.

Fundraising for Garza’s draft campaign is set to begin next week.
SHARE THIS STORY