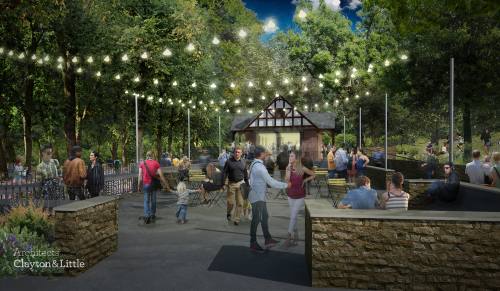 The Pease Park transformation will include a revitalization of the Kingsbury Street entrance.

More than four years after City Council approved Pease Park’s master plan, Austin’s parks board Dec. 4 approved initiation of the design and construction of the plan’s first phase—a transformation of the park’s south end into an attractive, lively space near the heart of the city.

The project reimagines the immediate 13 acres of parkland beyond the Kingsbury Street entrance stretching along the west side of North Lamar Boulevard between 15th Street and Martin Luther King Jr. Boulevard. The plan aims to turn the area, dubbed Kingsbury Commons, into an active gathering location suited for a central urban park.

The city of Austin is partnering with the non-profit Pease Park Conservancy, which recently received a $9.7 million gift from the Moody Foundation to help finance the project. Local firm Ten Eyck Landscape Architects—responsible for the Lone Star Court hotel at the Domain and the Plaza and Cellars at Pearl Brewery in San Antonio—has been tapped to lead the design of the project, with help from other local outfits like Clayton & Little.

A representative from Ten Eyck said the park designs are still under development, but early looks show the revitalization of the site’s historic gateway and Tudor cottage, new restrooms, a splash pad, tree house, a baseball diamond and volleyball and basketball courts.

Kingsbury Commons only represents phase one of the larger, 20-to-30-year plan to develop the Central Austin park. The parks department estimates construction to begin in 2019, with completion estimated by 2021.