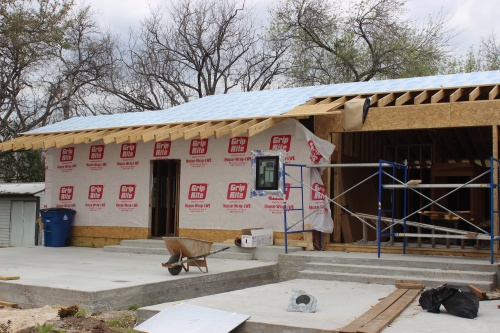 A gentrification report from researchers at the University of Texas highlights areas throughout the city experiencing accelerated levels of redevelopment and displacement and what city leaders can do about it.

Of the 200 Austin neighborhoods analyzed in a recent University of Texas-led gentrification study, the results show 58 areas of the city fall within the spectrum between experiencing continued loss of neighborhood culture and being vulnerable to future displacement.

The detailed report uses an interactive map to highlight the city's most impacted areas, causes, best practices from other cities and goals for Austin to work toward. University of Texas Law professor Heather Way, one of the report's authors, said it will now be up to City Council to strategically and thoughtfully act on the findings.

City Council commissioned the report last year. Way and co-authors Jacob Wegmann and Elizabeth Mueller—both professors at the University of Texas School of Architecture—presented their findings to City Council on Tuesday.

“It’s not realistic for you to think a neighborhood would not change, or that you would be able to completely stop the change taking place under a lot of market pressure,” Mueller told council. “But the [question] is, can you preserve enough of that community for the vulnerable people there that they still feel like they have a place in that community.”

The study, called Uprooted: Residential Displacement in Austin’s Gentrifying Neighborhoods and What Can Be Done About It, measures gentrification through a handful of indicators: the vulnerability of residents—measured through race, education, income and those who rent; demographic changes—whether more white people are moving people into the neighborhood—and housing market appreciation over the last 25 years.

The researchers said over the last 30 years, Austin’s most vulnerable residents have been continually pushed further away from the center of the city, resulting in demographic changes in several central neighborhoods, such as Tarrytown, Bouldin, Rosewood and Blackland—to name a few.

The study highlights neighborhoods like South Lamar and East Cesar Chavez as experiencing the most extreme gentrification, while neighborhoods such as Brentwood, Blackland, Bouldin and Galindo have experienced “continual loss” of culture of neighborhood character. Among the neighborhoods listed as hosting the most vulnerable populations include Rundberg East, Rosewood, East Riverside and Comal Bluff.

District 1 Council Member Ora Houston said city leaders have known for nearly two decades the impacts of gentrification, yet little has been done. When she asked the researchers what they may attribute the lack of action to, Way said lack of political will.

“The people with the most power seem powerless to stop this,” Houston said. “I hope in another 18 years we won’t be asking for another study, because the people on the edge will be further out and we wont have anyone else to study.”


Searching for solutions within and without

The report offers a look at programs in Portland, Oregon, Washington D.C. and in one neighborhood in Austin that are finding success in slowing the roll of gentrification and displacement.

According to the report, Portland, which has experienced accelerated demolitions and gentrification in certain neighborhoods, has implemented a right-to-return program. The program, backed by $100 million over six years, helps displaced families with roots in the neighborhood return to the area they or their family once lived. The city uses a funding mechanism known as tax-increment financing, which uses tax increases attributed to gentrification and reinvests it into programs to help the area.

Washington D.C.’s Columbia Heights neighborhood allows tenants the first right of refusal when their building goes up for sale as a way to secure it from a new landlord hiking up the rent. The report’s authors also attributed the neighborhood’s success to “active preservation efforts.”

Austin’s Guadalupe Neighborhood earned a tap for best practices. Decades ago, residents in the area formed Guadalupe Community Development Corporation and bought several tracts of land to preserve for affordable housing. The corporation sells the homes to low-income residents, but retains rights to the land, which keeps the price of the property from skyrocketing. If the resident wants to sell the home, the corporation holds the right of first refusal.

The report lists several goals for the city to work toward that include: setting up a homestead preservation center to help residents secure their exemptions; creating a gentrification risk database and employing an affordable housing preservation officer; begin buying property to preserve as affordable and create neighborhood scale displacement mitigation plans.

Way told council she and the authors refrained from publishing just another report with a long list of recommendations.

“I did not want to produce a report where we give you, like, 500 ideas and then you can do three of them and say, ‘But we're implementing that report,’” Way said. “That’s not necessarily going to help us make progress.”
SHARE THIS STORY