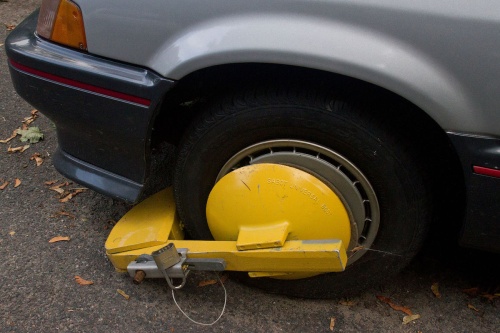 Austin City Council lowered the fee vehicle owners have to pay to have a boot removed from their vehicle.

Those who get a their vehicle booted will not have to pay more than a $100 fee following Austin City Council’s Thursday decision to regulate the industry moving forward.

Vehicle booting is the practice of immobilizing a car by locking its wheel with a metal clamp, or boot. This is typically done as an alternative to towing when a vehicle is in violation of parking rules. A booting fee is the money a vehicle owner has to pay a private company to have the boot removed.

Current booting fees in Austin typically run up to $150 according to representatives from local booting and towing businesses. City Council action comes as the vehicle booting industry in Texas was scheduled for complete deregulation following a bill passed by the state legislature last year.

According to representatives from the city’s transportation department, the deregulation—set to begin Sept. 1—would open the door for booting companies to charge exorbitant fees for their service. Austin City Council’s decision aimed to protect vehicle owners against the potentially excessive fees.

City staff initially recommended council cap the fee at $50; however, a handful of booting company representatives pushed back, explaining that the low fee would be unsustainable and ultimately incentivize towing over booting, a much more expensive operation for the customer.

Anthony Martinez, a representative from the local Republic Parking Enforcement, said booting is already less attractive for companies with a $150 fee.

“Booting is harder, you have to have a face-to-face interaction with the customer [when you take a boot off] and there is always an argument,” Martinez said. With towing, he said, companies can just take the vehicle away without seeing the owner.

Mayor Pro Tem Kathie Tovo pointed out that although it is more expensive for the vehicle owner, choosing to tow over booting adds cost and effort to the companies. Tovo said she did not believe companies would automatically choose towing over booting with a $50 fee cap.

District 2 Council Member Delia Garza sided with the majority and supported the $100 cap, saying it is already a reduction in cost to vehicle owners and moves the issue in the right direction.
SHARE THIS STORY