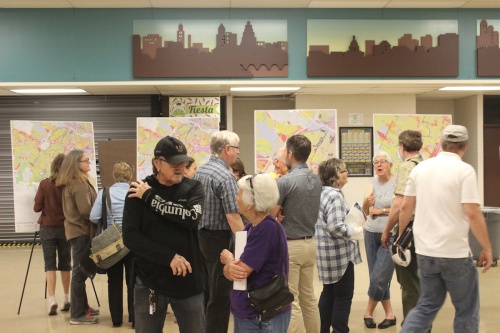 Since the zoning maps were initially released in April 2017, CodeNEXT has been at center stage of public discussion.

Voicing concern over a “poisoned” process he said was injected with hyperbole and misinformation, Adler proposed via a message board post to Austin City Council that they end the current process and task new City Manager Spencer Cronk with creating a new path forward.

The mayor and other city leaders pointed to a series of events that attributed to the process’s rocky journey. Among the changes Austin has dealt with since code rewrite discussion began in 2012, the city has switched to district representation for city council, has had three city managers, several changes in executive leadership, numerous CodeNEXT project managers and the recent death of John Fregonese, a consultant who was leading the data analysis.

Adler’s recommendation sent shock waves through a community that has become increasingly divided over the rewrite’s direction. On one side stand those who say adding housing density would ruin Austin’s existing neighborhood character. Standing opposite are those who say the city needs additional housing throughout its neighborhoods to responsibly manage its unprecedented population growth.

Here is what city leaders, experts and stakeholders are saying about the call to close CodeNEXT:

The four council members who have aligned as pro-housing density released a joint statement after Adler’s announcement:

“We are disheartened that in a time of national crisis that calls for unity, factions from Austin’s wealthy and privileged sectors funded campaigns of fear focused on maintaining the status quo–the status of unfair and unequal treatment concentrated in the remaining low-income and working class neighborhoods in our city,” they wrote. “We vow to continue working towards solutions worthy of our city’s values.”

Tovo, Houston, Pool and Alter formed a preservation caucus to fight for Austin’s existing neighborhood character. They supported the petition from residents demanding voting rights over the rewrite’s final product.

The Austin Neighborhoods Council has actively opposed CodeNEXT. When Jack was elected last year, he referred to CodeNEXT as a “battle” the neighborhoods council needed to win. He said Thursday the group is “cautiously optimistic.”

“Glad to see [Austin City Council] finally listening to the community about the deficiencies in [the CodeNEXT proposal] staff has produced, but I also am concerned that this might be just a renaming of the same old, same old,” Jack said. “We’re cautiously optimistic that the city manager will create a new process that is more responsive to community concerns and hopeful about the opportunity to engage in that process.”

Shieh helped lead the Planning Commission during several late-night meetings going page-by-page through the minutia of the code, which eventually offered hundreds of recommendations to City Council on how to improve the code prior to final adoption.

“[Ending CodeNEXT would be] an incredibly bold move by City Council,” Shieh said on Thursday. “I think this is a good move. Change is coming to Austin whether we like it or not. I hope the city manager can quickly come up with alternative measures. The longer we wait, the more trouble we get into.”

Duncan has been one of CodeNEXT’s biggest critics, saying earlier this year the process needed to end.

“When I heard about it I felt shock, awe, relief and excitement; I immediately had two margaritas,” Duncan said. “I was very pleased that common sense prevailed over politics and whatever it is that got us to this place. The code can't get too politicized, and council got their paws in it too early and too much. We need new leadership, new staff and new consultants and to commit to a balanced public engagement system that is meaningful.”

Evolve Austin has been vocal in its support for abundant housing and density throughout Austin. Turner said the cost is not the $8.5 million that Austin spent on consultants but rather the increasing housing prices and displacement of residents.

“We’re looking forward to working with the city manager and stressing the urgency of this to him,” Turner said. “All paths toward affordability go through the land development code. Our issues are not going away until we address the code.”

Before any draft proposals were released, Sullivan and the advisory group spent years bridging the gap between citizens and city staff to determine the community’s priorities and overarching direction of CodeNEXT.

“I am surprised and disappointed, but I understand,” Sullivan said on Thursday. “So much work has gone into this and maybe wasted. I thought council could work out the issues and come to a compromise. On the other hand, it’s possible the city manager comes up with a different process and makes progress on a new land development code. It’s not the end of the world.”

RECA, an organization of commercial developers, has also been critical of the CodeNEXT process up to this point. It continued that criticism in a statement released Wednesday.

“Since the CodeNext process began years ago, RECA technical experts have volunteered thousands of hours of personal time to review the three drafts of the code, provide technical analysis and submit detailed revisions...to contribute positively to the process,” RECA stated. “A process in which most of that feedback was blatantly ignored. We will remain at the table to provide additional technical expertise to make sure the community gets this right for the future of our city.”


Austin Board of Realtors

ABoR, an organization of residential realtors, has been active supporting the need for a new land development code.

“We are still assessing the ramifications of the possible end to the CodeNEXT process,” ABoR said in a statement released Thursday. “We will wait and see what [the city manager] proposes as next steps.”
SHARE THIS STORY