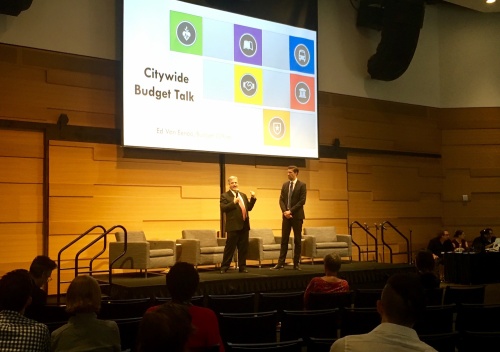 When residents got the chance Tuesday to weigh in on how the city spends tax dollars, mobility and public safety spending seemed to take center stage.

The town hall was the second of what will be 11 such events throughout the city’s council districts over the next month as the city prepares to write its budget for fiscal year 2018-2019. Fiscal year 2017-2018 was the first in city history where the general fund—paid for mainly by tax and fees revenue—eclipsed $1 billion. City officials expect that upward trend to continue.

Addressing the audience, Adler highlighted the successes of the capital city but said equity issues persist in certain areas of the community and that Austin and its leaders needed to do better.

Responding to a question from the audience, Adler said the possibility of a rail line from Austin to San Antonio has come up in recent conversations. He commented that the region’s Capital Area Metropolitan Planning Organization, or CAMPO, is studying the potential of a rail line along the IH-35 corridor.

Adler said it would be hard for him to imagine a city growing as fast as Austin without a way to move large amounts of people through the city quickly.

The department’s staff levels remain a central issue in the negotiations. The Austin Police Association said the department needs 329 more officers over the next five years to keep up with population growth. In March, City Council asked city staff to develop a staffing plan, which if implemented, is expected to carry a high price tag.

However, groups like the Austin Justice Coalition have advocated for the city to spend public safety funds on social programs rather than using those dollars to buy more police officers.

Adler said city council has made no decision on how to spend that money yet. He said the city plans to host community conversation in coming months to hash out a solution.


3. Residents feel they get a lot out of their tax dollars.

When polled on Tuesday how the city does in spending tax dollars, a majority of the roughly 50 participating residents said they felt the tax dollars to services ratio was on point.

Although a small sample size, Van Eenoo said the sentiment was consistent among residents in budget town halls over the years.
SHARE THIS STORY