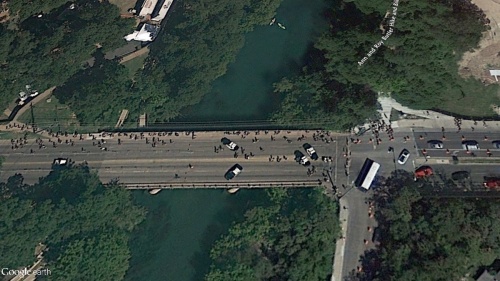 Five Austin bridges need major repairs or replacement according to a recent state of the bridges report from the city’s Public Works Department.

The report states 388 of 434—90 percent—of bridges with spans longer than 20 feet in Austin received sufficiency ratings between “Good” and “Excellent” in a 2016 Texas Department of Transportation analysis. The state average for bridges reporting “Good” or better is 82 percent. Forty bridges received “Satisfactory” rating and six earned a “Fair” rating.

The city spends $1 million annually on bridge maintenance and repairs. A task force proposal for the 2018 general obligation bond expected to go in front of voters in November has recommended $54 million go towards bridge rehabilitation or repair.

The report states many bridges built at the time were designed with a 50-year design life and made for lighter truckloads. However, the bridge is the only approved trucking route for Ulrich Water Treatment Plant vehicles and experiences 16,000 daily commuters. The report says that 13 trucks weighing over 70,000 pounds cross the bridge every day for the water treatment plant.

The bridge has experienced substantial flood damage from high volume dam releases and increased truck loadings. Staff recommended a bridge replacement that increases the weight capacity, lifts the bridge out of the 100-year floodplain and expands options for pedestrians and bicycles.

Built in 1925 and expanded from two to four lanes in 1946, the bridge experiences high traffic volume as the main connector of many roads and communities.

The report states that although in fair condition, the dimensions of the bridge are outdated.

Staff’s proposal for the rehabilitation or replacement of the bridge includes a 30-foot widening of the bridge to add two 6-foot-wide sidewalks; two 5-foot-wide bike lanes and four 10-foot travel lanes.

These south Austin bridge take these east-to-west routes over the Union Pacific Railroad tracks. The bridges’ stability has been a concern since its construction in the early 1980s, according to the report.

“Mechanically stabilized earth walls” support the structures. However, the walls have experienced damage since their construction, resulting in cracks in the roadway and separation between sidewalk and street.

Staff’s proposal to replace or rehabilitate walls would reinforce the bridges for 75 to 100 years.

The report says if the projects are not done, restrictions on vehicular trips and truck weights is likely on its way.

“[These are] major east-west [routes] in south Austin with limited alternative routes,” the report states. “If lanes of traffic were restricted…it would potentially cause a loss of mobility, significant delays…long detour routes…and impact emergency response times.”

The bridge, which is the only access for five residences and businesses on the north side of Boggy Creek, has been “severely” damaged by seven major floods and has received extensive repairs over the last 20 years.

During major flooding events, the bridge has been compromised, making the residences and businesses an island and hard to reach for emergency response vehicles. The report says a replacement is needed to lift the bridge out of the historic flood levels. A replacement would include a wider deck for bike and pedestrian amenities.