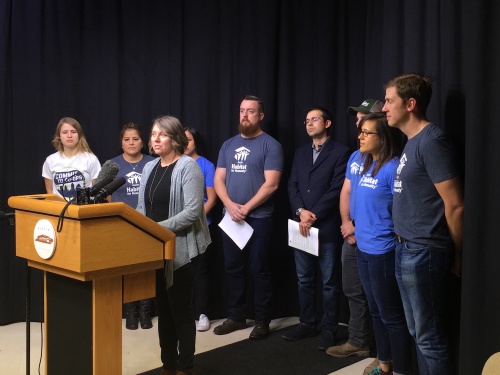 CodeNEXT is the city’s nearly five-year, $8.5 million effort to rewrite its 30-year-old land development code and guide Austin’s built environment into the future.

Representatives from Austin Habitat for Humanity, the Austin Housing Coalition and the Austin Cooperative Business Association took turns at a press conference Wednesday morning condemning CodeNEXT’s third draft for failing to live up to its own potential in meeting the city’s affordable housing needs.

“We need a code that maximizes affordable housing production and [CodeNEXT Draft 3] is a step in the wrong direction,” said Wayne Gerami, vice president of client services at Austin Habitat for Humanity.

The point of focus was the capacity of affordable housing units provided through density bonus programs—the chief method for providing income-restricted housing in Austin. The current code’s capacity is 1,450 units; the second draft of CodeNEXT expanded the program and its capacity to 5,000 units and the third draft pushed it to 6,000 units.

Although there has been a consistent increase, the advocates said it is not enough. They pointed to a hypothetical scenario in the second draft created by CodeNEXT housing consultants Fregonese Associates. The scenario maximized levels of density and entitlements throughout the city and produced an affordable housing capacity of 17,972 units achievable through density bonus programs.

However, that hypothetical scenario in CodeNEXT's second draft was achieved through increases in housing density throughout urban core neighborhoods, a point of contention for several neighborhood groups and council members who prioritize the preservation of existing neighborhood character. The ideological split between preservationists and those who favor increased density is a political tug-of-war that has defined the CodeNEXT saga.

Alina Carnahan, public information officer for CodeNEXT, said the affordable housing advocates are just one community group out of several voicing their priorities, all of which the city is working with to produce a balanced code, which city staff has said is an unenviable task.

“CodeNEXT is not the silver bullet that solves all the city’s issues,” Carnahan said. “The city is having to balance different priorities from all over the community and we’re excited to hear from lots of different groups and continue to work with them in the future.”