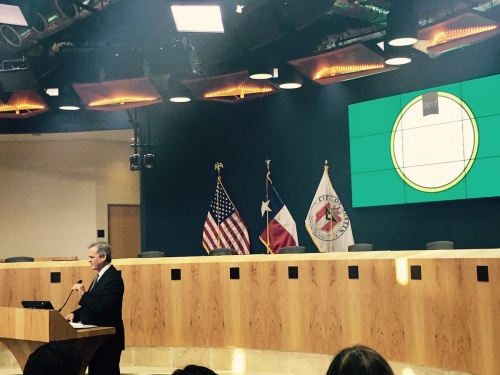 Austin Mayor Steve Adler said he would not participate in this year's Veterans Day Parade because of the inclusion of groups that will carry the Confederate flag.

Austin Mayor Steve Adler said he would not march in Saturday’s Veteran’s Day parade on Congress Avenue because the parade would feature groups representing the Confederacy.

Adler issued the statement Thursday morning. It is the first time since he took over as mayor in 2015 that he will not attend the annual parade honoring the nation’s veterans.

“Veterans Day should only be about honoring United States military veterans," Adler said in a statement. "Symbols of racism, Civil War secession and white supremacy should not be forgotten or erased, but they need to be remembered and studied in museums and classrooms, not cheered and applauded in parades.”

Adler said the decision to not participate was a personal choice, and he is not advocating for others to boycott. Groups associated with the Confederacy have marched in prior years when Adler did participate. He said it was something that always made him uncomfortable; however, he said he now has a clearer perspective on the pain some in the community associate with the Confederacy.

“I have increasingly heard from people in the community that have expressed to me real significant emotion about having a flag that is a symbol of the Confederacy, … about slavery,” Adler said. “That hurts people, and I know that now to an ever-increasing degree.”

Jim Darwin, chairman of the Veterans Day parade volunteer committee, said the committee voted unanimously to ban the infamous X-patterned battle flag from the parade but still wanted to honor the veterans.

"The committee understands that some in our community consider the Confederate battle flag as a negative symbol and therefore voted unanimously to ban the flag from the parade," Darwin told Community Impact Newspaper. "The committee's focus is to honor our veterans by including as many veterans as possible and create a safe environment for the parade."

Darwin said he was under the impression that Adler had met with the Confederate groups and worked out a compromise that would allow simultaneous participation. However, Adler confirmed Thursday afternoon that he would spend Veterans Day volunteering at the Central Texas Food Bank, which serves a large population of the local veteran community.

The Veterans Day parade is scheduled for Saturday, Nov. 11 and will begin organizing at 7 a.m. on the Ann W. Richards Congress Avenue Bridge.
SHARE THIS STORY