Downtown business employees, patrons might have to pay for parking at Austin City Hall soon 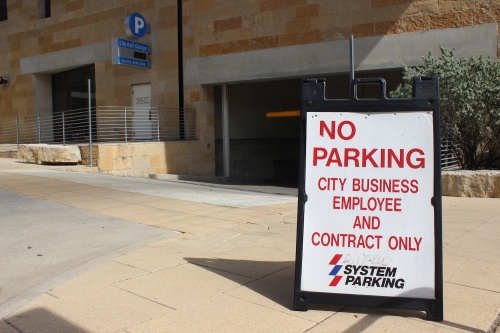 What originally was set up to be a run-of-the-mill contract extension for parking garage subsidy turned into a conversation about the changing landscape of Austin’s downtown business economy.

Since 2005, Austin has subsidized use of the City Hall parking garage for downtown business employees and patrons from West Third and West Cesar Chavez streets and San Antonio and Colorado avenues. When the five-year subsidy contract renewal came up for council approval on Thursday, Mayor Pro Tem Kathie Tovo questioned whether it was the right move for a city that has seen its downtown economy substantially evolve over the past 12 years.

Tovo said the city originally negotiated the subsidies as a strategy to attract patrons to downtown businesses. She said that extra effort to attract may be unnecessary now that Austin’s downtown is a booming city center.

District 4 Council Member Greg Casar said that if the city wants to move in the direction to discourage people from traveling in single-occupancy vehicles when feasible, then the city should look into subsidizing other means of transportation.

Resident Gus Peña said the parking subsidy was crucial in the city’s support of affordability.

Council eventually postponed deciding on whether to renew the contract until Nov. 9 so that it can gather more information on how the change could affect the city’s relationship with downtown businesses.
SHARE THIS STORY