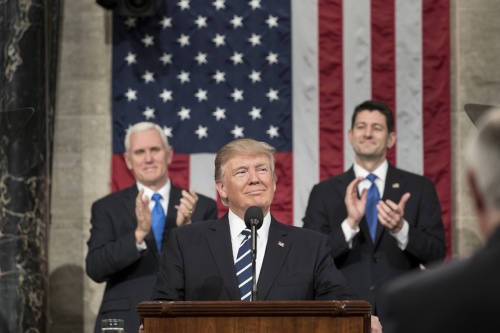 President Donald Trump is slated for a Texas visit this week, and the city of Austin is preparing for a possible visit from the president.

President Donald Trump will be in Austin around 2:20 p.m., according to reporting from Fox 7, Community Impact Newspaper's media partner.

#POTUS is one his way! He'll be here in Austin around 2:20 this afternoon after going to #CorpusChristi first. https://t.co/AkB4Viy8yT

President Donald Trump "might" make his way to Austin in his Texas trip as he delivers remarks in the wake of Hurricane Harvey's devastation along the Gulf Coast, according to Mayor Steve Adler's office.

The city is making preparations in the event the president does come to Austin, but official word that Austin will be a stop in his itinerary will have to be confirmed with the White House, Adler's spokesperson Jason Stanford said Monday.

Further details, including whether roads in the city will be affected by the presidential visit, were not available Monday afternoon.

.@MayorAdler’s office says re: @realDonaldTrump visit to #ATX #POTUS “might" come to Austin, and the city is preparing for a possible visit