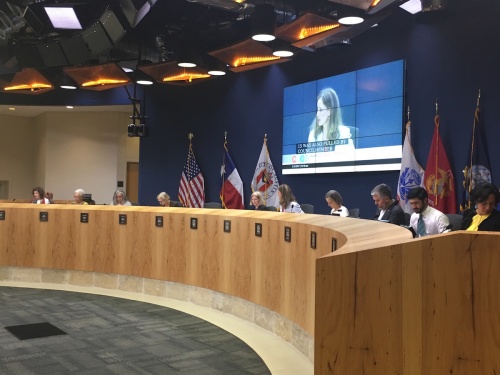 Austin City Council directed the city manager to look for properties that have potential for conversion into short term emergency homeless shelters.

In a measure to address the growing homelessness issue in Austin, City Council directed the city manager to search for city properties that could be converted to emergency shelters.

The city has not committed to using the identified properties as shelters, but Thursday’s action initiates necessary research into whether the city has the option. Mayor Pro Tem Kathie Tovo, who has led the dais’s efforts in tackling Austin’s homelessness problem, sponsored the item.

The city manager will report back to City Council by Aug. 24 with at least five properties that could potentially convert to short-term emergency shelters. The homeless issue, according to Tovo, is especially acute downtown, where the ARCH homeless shelter is overcrowding and providing no more beds for the homeless population.

A timetable for the short-term shelter’s availability of between three to six months was thrown around during Tuesday’s City Council work session. However, Ann Howard, executive director of the Ending Community Homelessness Coalition said told Community Impact Newspaper that she was unable to provide a precise estimate for the length of “short term.”

The action on Thursday follows an in-depth discussion from Tuesday’s work session regarding the realities of a commitment to provide emergency short-term shelter for the city’s homeless population.

District 5 Council Member Ann Kitchen supported the item but said the effort needs to be focused citywide and not just downtown.

“This is a community emergency, and this needs a community-wide response,” Kitchen said on Tuesday.

Tovo said the city could address the homelessness issue in a similar way to a natural disaster in which the city would open up emergency shelters. On Tuesday, she referred to the city’s efforts during Hurricane Katrina and severe flooding in town.

Council members expressed concern about addressing the homeless situation in this way. District 2 Council Member Delia Garza said the emergency shelters opened in after the city’s flooding issues were only open for a few days, and in the wake of Hurricane Katrina, there were not even hotels for people to go to.

Garza said providing temporary shelter for the homeless was not enough. She said bringing in support services would be necessary. Howard explained that these details were being worked out and to fully address the homelessness issue would take a lot of resources.

District 1 Council Member Ora Houston said the city must realize it is limited in resources and urged her council colleagues to get creative in addressing the issue. She said committing to housing the homeless gives the city a responsibility greater than just an altruistic landlord.

“People who are chronically on the streets have health care issues, and we have to [tend to] their health issues while they are in our care,” Houston said.