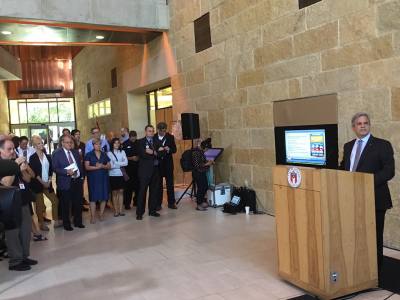 Austin Mayor Steve Adler proposed a plan on Monday, July 17 that would bring a solution to the city's homelessness problem through a tax on tourists and an Austin Convention Center expansion.

Austin Mayor Steve Adler suggested a plan to tackle downtown's homelessness problem in a press conference Monday. But it will take a tax increase on tourists, a convention center expansion, and housing, Adler said.

Adler’s announcement on Monday provides a directed course of action for the “Downtown Puzzle”—a phrase he coined late last year, which poses the issues of downtown as a system where its success or failure depends on that of each of its parts. These include the homelessness issue, the Austin Convention Center, the Waller Creek Linear Park and other community benefits—the Mexican American Cultural Center, the historic and cultural preservation of Sixth and Red River streets, and downtown mobility.

Here are 5 takeaways from the mayor’s announcement.

“We know the key ingredient to helping the homelessness and meeting that challenge, and quite frankly, it’s to house the homeless,” Adler said. “It’s a housing-first policy.”

Adler said the issue of the homeless population has made downtown unattractive for residents, and most players in the “downtown puzzle” have the homeless issue as a priority in the puzzle's solution. However, the city has not been able to come up with a steady revenue stream to provide the housing and resources necessary to tackle the homeless problem.

“Where is the money? I think the community has found a solution,” Adler said. “It’s a solution that makes tourists pay for our homeless challenge.”


“It’s a solution that makes tourists pay for our homeless challenge.”

2. Tourists will fund housing and nourishment of the homeless population and capital improvement initiatives that support tourism.

Adler said he wants to create a Tourist Public Improvement District, TPID, that would initially add a 1 percent tax to the bill of hotel customers. The tax would provide a revenue stream of roughly $4 million annually that would go directly to housing and resources for the homeless population. The public improvement district tax would increase to 2 percent after five years, which would bring in about $8 million every year for homelessness.

Adler also said he wanted to move forward with a staff recommendation to increase the hotel occupancy tax, from 15 percent to 17 percent. According to Adler, this would help raise $609 million for projects related to venues, historic preservation, arts and other initiatives that provide a boost to tourism.


3. The hotel industry is okay with a 3 percent tax bump as long as an Austin Convention Center expansion is locked in.

“We need to help support our hotel industry as they are stepping forward to help fund our meeting our challenge,” he said. “I don’t see how we solve all the pieces in this puzzle without a convention center expansion.”

Adler said the city should spend $559 million of the $609 million raised through an increased hotel occupancy tax that would go toward a convention center expansion.


4. The Austin Convention Center would need to be for everyone.


5. The effect would trickle down.

Adler said the revenue from an increased hotel occupancy tax, combined with the revenue from the public improvement district, would bring in money to tackle the homeless issue and a convention center expansion while still providing extra funds that he said could go to the final touches of the Mexican American Cultural Center or historic and cultural preservation of Sixth and Red River streets.
SHARE THIS STORY