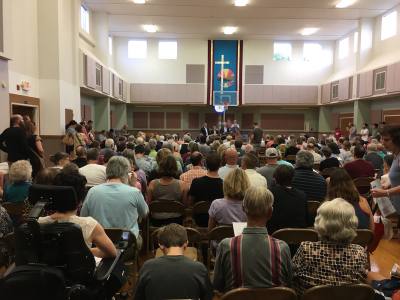 Emotions ran high as hundreds of residents packed into the Faith Lutheran Church in the Brentwood Neighborhood on Wednesday evening for a special question-and-answer session with Austin Mayor Steve Adler on CodeNEXT, the city’s land development code rewrite.

With the second draft of CodeNEXT due in less than two months, Wednesday’s event afforded local residents the opportunity to voice concerns and ask questions about the project. There was little support for the first draft of the proposed maps and code, which people portrayed as either adding too much density or not enough.

The evening, like the CodeNEXT process itself, provoked a variety of emotions from residents. Some voices trembled while describing the fear of being forced out of a home due to increasing property taxes while others were angered by the perceived attempts of increasing density in their neighborhood. Hollers, hoots and applause rang out when a speaker suggested firing the project consultants from the California-based Opticos Design and hiring a local team.

“This about families,” said David King, past president of the Austin Neighborhood Council, who moderated Wednesday’s event.

Here are the four takeaways from Wednesday night.

“How can you defend the application of transect zones in well-established neighborhoods?” one resident inquired. Adler said the CodeNEXT process is about meeting community needs.

The mayor assured residents that neighborhood plans were taken into account, but to the degree that they weren’t, the community needs to sit down with the maps and attempt to understand why.

Multiple residents voiced concern that the push in CodeNEXT for density in the neighborhoods was adding market pressure and exacerbating the displacement of residents.

“No amount of displacement is acceptable,” Adler told the residents. “But displacement is happening right now.” He added that the status quo with the city's current land development code is not working, and CodeNEXT is the city's opportunity to do something new.


3. While most of the attendees were against density in the neighborhoods, another ideology exists but was underrepresented.

Many of the questions proposed on Wednesday aligned with the position that adding density to the urban core neighborhoods would exacerbate the affordability issue and change the character of the neighborhood. It was most obvious by the raucous applause speakers got who opposed density, and the silence that met those who said more housing types and density were needed.

However, that is not the universal view in neighborhoods, as expressed by Brentwood resident, Jay Crossley.

“Let’s please not judge the opinion of my neighborhood by those who can show up at a Wednesday night meeting,” said Crossley, who had a work event and could not attend. “The city of Austin auditor actually found our current system of 'you get a voice if you show up' to be inequitable and misrepresentative of the people of Austin in the neighborhood planning system. Taking public opinion from this kind of gathering is one of the mistakes that has helped get us in the mess we’re in today. Inequity in decision-making systems leads to less optimal decisions.”

Many of the questions from the audience on Wednesday voiced concerns about flooding and how increased density in the neighborhoods on old infrastructure could aggravate flooding.

“The intent and the design of CodeNEXT was to improve the flooding we have in this city,” Adler said. “That’s what the engineers were tasked to do and to the degree that they did not do that, we need to fix it.”
SHARE THIS STORY