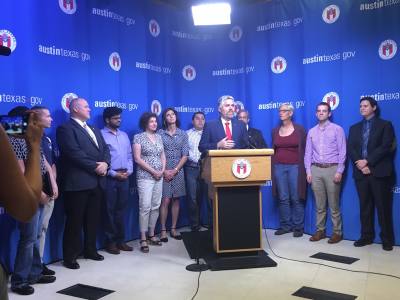 The Lesbian Gay Bisexual Transgender Queer Quality of Life Advisory Commission held its first meeting on Tuesday evening, which officials touted as a historic event and the culmination of years of work by city staffers, activists and elected officials.

“There are shoulders of giants that we stand on here today,” said District 6 Council Member Jimmy Flannigan during a pre-meeting press conference. Flannigan, who is the first openly gay man to serve on Austin City Council, was sure to give a shout out to his predecessor, former council member Randi Shade—who, elected in 2008, was the first openly gay council member and played a crucial role in bringing LGBTQ issues to center stage. "In Austin, we like every star and every stripe of the flag, and we love every color of the rainbow,” Adler said. “Creating an LGBTQ Quality of Life Commission helps make Austin more Austin."

Austin was given the highest rating in Texas by the Human Rights Campaign last year for its support of the LGBTQ community. According to Adler, Austin also has the third-largest LGBTQ community per capita in the country.

There was a palpable buzz throughout Tuesday’s opening meeting—which coincided with LGBT Pride Month—and began with a ceremonial cake, complete with a rainbow and unicorn design. There were laughs at “Golden Girls” references, tears during emotional testimonies of experience in the LGBTQ community, indications of preferred gender reference, gratitude for Austin’s inclusive community and clear recognition of the importance of the day.

Then the board—whose membership includes engineers, public activists, social workers and lawyers—got down to business, running through the laws surrounding meetings, the commission’s structure, its bylaws and bureaucratic reach.

The commission started Tuesday with 11 members—appointed by the mayor and 10 council members—but will grow to 15 after the commission appoints four more members among themselves. According to the commission’s staff liaison, there are 47 applicants for those four positions.

Flannigan said that the commission was created without specific policy agenda. However, he told the members that their role was to not just list the needs of the LGBTQ community but to prioritize them.

“There are a lot of wants and needs, but there is no way we can do all of it,” Flannigan said.

The only specific city issue on the commission’s agenda was proposing guidance to the City Manager Search Advisory Taskforce, the group charged with the collecting public input on what the next city manager should look like. Commissioners highlighted issues such as violence against the community as well as employment and housing discrimination.

In October 2016, Austin Mayor Steve Adler called for the formation of an LGBTQ Quality of Life Advisory Commission as the city continued its aim to analyze and understand the needs of its diversifying population. The LGBTQ Commission joins the city’s other cultural commissions, which include African-American, Asian-American and Hispanic groups.
SHARE THIS STORY