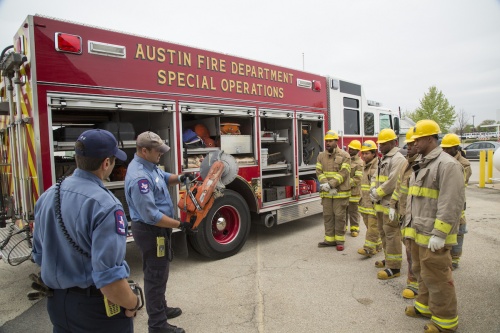 The Austin Fire Department is in the midst of budgetary issues because of staffing issues that have emerged in recent years.

The city of Austin and its fire department face tough decisions in the wake of a series of events that officials say have snowballed and created a staffing and budget crisis for the department.

The 126 vacant positions at the fire department are projected to increase to 150 by the end of the year, both of which are “unusually high” amounts, according to Austin Fire Department Chief Rhoda Kerr. With 256 personnel needed on the clock each day, the fire department has spent $21.6 million in overtime pay to cover the vacancies so far in fiscal year 2016-17, a roughly $6.5 million increase from FY 2015-16.

“This will reduce the amount of resources available for other pieces of the budget,” said District 6 Council Member Jimmy Flannigan, who sponsored a resolution earlier in June that directs the city auditor to look into the fire department’s use of overtime.

Officials say an intersection of problems created the crisis—an expansion in the staffing model to meet safety requirements, a hiring penalty imposed by the federal government, and an uptick in resignations and retirements—and has implications beyond just the fire department.

The crisis has brought every option to the table: an overhaul of hiring practices to staffing reductions and a rollback of some of the more expensive minimum safety standards.

In 2008, the Austin City Council increased the mandatory staffing minimum for fire trucks to four firefighters to align with nationally held safety standards. The council’s resolution was implemented immediately for fire engines—the trucks with hoses and crews who perform search and rescue operations during fires—while a goal was set for all other vehicles—ladder and rescue trucks, which one former firefighter described as “giant toolboxes”—to reach four-person staffing by 2019.

Assistant Chief Aaron Woolverton said the increased staffing minimum on fire engines was crucial in implementing the “two-in, two-out” rule. In dangerous situations, such as a burning house, firefighters can not enter a building unless two go in together and two are outside—which has enhanced the safety of firefighters and civilians, he said.

A federal grant received by AFD in 2013 helped the department create 36 new positions and reach its 2019 staffing goal by 2014. The first staffing expansion was beneficial, but Flannigan said the second expansion unnecessarily drove up the cost of overtime pay. He said he is mulling a proposal to repeal the most recent four-person model.

However, District 2 Council Member Delia Garza, a former AFD firefighter, said any step back from a best safety practice would be a “really bad decision.”

“The fire service is dangerous; it’s unpredictable. You’re in such a different scenario every time,” said Garza, who referred to a recent incident in San Antonio in which one firefighter died and another was critically injured. “And even when you do everything right and have the best safety standards, you can still lose firefighters.”

Garza said the biggest issue behind the vacancies and overtime is not the department’s size, but its hiring practice, which is still recovering from a 2014 U.S. Department of Justice investigation into discrimination.


“It’s a slow and inefficient process. I think it’s insanity because we keep doing that thinking this is going to solve our problems.”

Every two years the department will test over 1,000 applicants at once, all of which qualify for a list of potential hires. They are then screened and placed on a list of desired hires. In a good testing year, the department will screen enough desired hires to run four 45-student, seven-month cadet classes over the following two years. However, Assistant Chief Aaron Woolverton said there has not been a good year since 2013.

In 2013 the U.S. Department of Justice received a complaint that AFD’s hiring process was statistically discriminatory against Hispanic and African-American applicants. The department’s 2013 hiring was cut short, and during the investigation in 2014, the department was unable to hire anyone. The DOJ ruled the complaint valid and placed AFD under a consent decree, which required the DOJ to consent on the list of potential hires. Woolverton said the department essentially could not hire anyone for two years, and the vacancy gap grew as the number of retired firefighters increased.

When the department could hire again in 2015, of the roughly 1,700 people who took the test, the DOJ only consented to the first 200. The department’s own screening process brought that number down to around 100 desired hires, hollowing out the cadet class sizes for the next two years.

“It’s a slow and inefficient process,” Woolverton said. “I think it’s insanity because we keep doing that thinking this is going to solve our problems.”