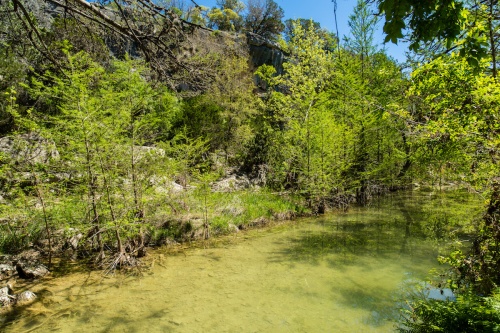 The city of Austin released its annual State of Our Environment report on Thursday.

The environment in Austin remains preserved and protected despite its tremendous growth over the past few decades, said Chuck Lesniak, the city's environmental officer, in the annual State of Our Environment report published on Thursday.

The city's environmental policies often stand in contrast to the state's and now the federal government's as regulations begin to be rolled back, Lesniak's foreword in the report states.

"Austin has made environmental protection a community priority for well over 30 years," he said. "That ongoing effort is documented in these pages, and the fruits of that work are seen in Austin’s almost unmatched economic vitality and growth and in the fact that Austin has been able to preserve and protect our environmental resources during that growth."

Here are four takeaways from the report: Dye injections were used to test whether spills from the SH 45 SW construction site could harm water quality in environmentally sensitive areas.[/caption]


The construction of SH 45 SW may affect water quality in Flint Ridge Cave and the Edwards Aquifer.

The city conducted studies of how hazardous spills might affect water quality by injecting tracers near SH 45 SW. During the study, staff recovered the tracers in wells and at Barton Springs less than two days after the injection. The study concluded this provided evidence of potential for harm to the water quality in nearby or groundwater sources.

"These tracing studies along SH 45 SW are important because they demonstrate how spills of hazardous material can negatively impact drinking water and Barton Springs," the report states. "City of Austin staff are monitoring the initial ground clearing for the highway for any impacts to remaining adjacent Water Quality Protection Lands and Bear Creek, and will continue monitoring Water Quality Protection Lands for construction and operations impacts. A deeper understanding of the local groundwater flow is critical for protecting this unique underground Austin heritage."


Most of the area's creeks are in good to excellent condition, but those in the most urban areas are not.

According to the report, this is typical because of intense historic development that did not have progressive environmental rules. Johnson Creek is in marginal condition, according to the report. Among the creeks in fair condition are Blunn, Boggy, Bouldin, Buttermilk, Country Club, Rattan and Waller creeks.

Onion Creek is low in nutrients, which is a good thing. When creeks reach excess levels of nutrients, such as nitrate and phosphorus, algal blooms are triggered, causing fish kills and bad odor. Onion Creek, however, may be at risk of increased nutrients and algal blooms if the city of Dripping Springs' proposed direct discharge of treated wastewater is put into effect, the report states. The State of Our Environment report contains a heat map of Austin’s creeks and their conditions.[/caption]


The drought from 2011-15 contributed to Austin Water customers experiencing higher incidents of taste and odor problems.

During times of drought, cyanobacteria blooms and low oxygen levels are prevalent in Lake Austin. Warm, low-in-oxygen waters, as well as the development of earlier and larger blooms, often lead to Austin Water customers experiencing taste and odor issues, the report states.


The city's trees are worth approximately $16 billion in compensatory value.

A 2016 United States Department of Agriculture report entitled Austin's Urban Forest found that trees in the city contribute significantly to the environment, the economy and residents' well-being: