In balancing act between music industry and residential quality of life, Austin looks to the ceiling 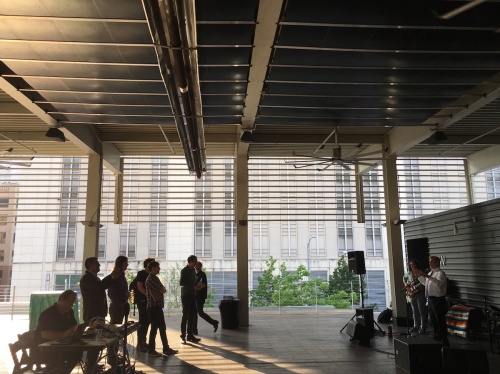 The tech world may have an answer to the question that Austin’s music industry has struggled to answer.

On Monday evening, city officials, neighborhood representatives and music industry insiders gathered under the Brazos Hall rooftop concert gazebo for the demonstration of a speaker system technology that looks to neutralize the balancing act between a thriving live music industry and an acceptable quality of life standard for the growing number of central core residents.

“I just want enough people outside of the music industry to see this so that in conversations with people, we can actually say we’re actually trying to do new stuff with this pilot,” Austin Mayor Steve Adler said to the audience of roughly 30. “Which I don’t think people believe until they see this kind of thing. So we need people to spread the word." The Sound Ceiling hovers above the live band during Monday's demonstration at Brazos Hall. The system uses over 700 smaller speakers to produce a fuller but more direct sound.[/caption]

The venue didn’t look much different except for the 16-foot-by-26-foot solar panel-style speaker that loomed over the stage and dance floor. And standing directly under the speaker, the venue did not sound much different either, cranking at nearly 100 decibels with a deep, chest-thumping bass. Tough conditions for a neighboring residential area—let alone a conversation inside the club.

But a trip less than 50 feet away from the hovering speaker system, and suddenly a conversation at dining room sound levels became possible. At 65 feet, the decibel level is cut by nearly 20 decibels, and at the Whitely Apartments, 275 feet directly south of the venue, the decibel level was cut by more than half.

The speaker system, called the JBN Sound Ceiling, uses over 700 smaller speakers to create a straight plane of sound. The technology, developed in Sweden, has been around since the 1980s and is used by over 4,000 venues around the world, but according to Scott White, a sales executive for JBN, this is the first time the system has been introduced in the U.S.

While the technology has been around for decades, White said its popularity has seen a sharp rise in recent years. He attributed the product's increased attention to an uptick in urban development and a growing need for cities to balance their entertainment industry and quality-of-life standard.

According to Brandon Badillo, director of sales for Brazos Hall, the Sound Ceiling offers the best remedy he's seen for reaching that balance.

"People want to experience the Live Music Capital of the World, but if we have to shut off outdoor music by 10:30 p.m., then they're really not getting that whole experience," Badillo said. "It's about appeasing the people who are moving here, but keeping the status quo for what makes this a desirable place."


"I’ve been battling this music trespass issue [for a long time]. I live 2 1/8 miles away from Red River, and my windows were rattling on Saturday night during SXSW.”

However, the speaker system on display Monday evening costs between $50,000 and $60,000, no small investment for a struggling music venue. Adler said the city has considered investing in the system and providing it to venues through a zero-interest loan program. But before the city makes such an investment, Adler said he wants there to be a consensus in the community that the system is a step in the right direction.

“I want the neighborhood people to see it, and then if we all agree that this is a way to move forward, then we’ll figure out how it is that we do this,” Adler said.

Mary Ingle, president of the Austin Neighborhoods Council who attended Monday’s demonstration, said she liked the technology but was not optimistic that it would work on entirely outdoor music venues that do not have a ceiling like Brazos Hall.

“Anything that helps, and it works, then I am for it, I just want a remedy to the Red River District that rattles my windows,” Ingle said, referencing the ongoing sound complaint issues near the Red River Cultural District, one of the city’s premier music venue hubs. “If it helps, it helps. I’ve been battling this music trespass issue [for a long time]. I live 2 1/8 miles away from Red River, and my windows were rattling on Saturday night during SXSW.”

“It may sound like the neighbors are just complaining, but it sucks if you didn’t buy a ticket to a show and suddenly they are in your living room,” said Mike Lavigne, an ANC board member and executive board member for the Austin Creative Alliance. “The issue is not anyone’s fault, it’s a just a reality. If technology can solve it, then I will support it.”
SHARE THIS STORY