Austin parks department chimes in on hotel occupancy tax use 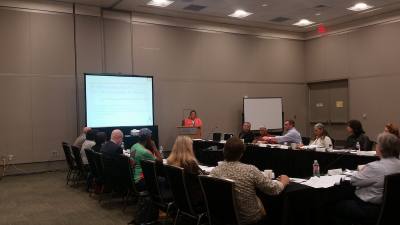 Kim McKnight from the Austin Parks and Recreation Department explains how the department is using nearly $1 million in hotel occupancy taxes allocated to to the department for the first time.

The Austin Parks and Recreation Department stated its case Tuesday for why it should receive a portion of the city’s hotel occupancy taxes.

“There’s kind of a bottomless pit of projects that we could pursue, and we’re very eager to diversify our funding stream,” said Kim McKnight, the department’s environmental conservation program manager, at a Visitor Impact Task Force meeting.

The task force is made up of a group of council-appointed, tourism-related stakeholders responsible for giving recommendations to Austin City Council on how to spend taxes generated through hotel stays.

McKnight outlined the department’s plan for how to spend nearly $1 million in hotel taxes allocated directly from  Austin City Council in fiscal year 2016-17.

The money was taken out of the 1.45 percent of hotel taxes designated to the Austin Convention & Visitor’s Bureau each year.

“It was a very pleasant surprise,” McKnight said of the first-time allocation.

McKnight said $5,370 will be used to update a brochure called "The History, Arts & Culture Guide," which highlights cultural amenities downtown and provides information on accessing parks in the area.

The larger sum of money—about $994,000—will be distributed to four restoration projects: the Oakwood Cemetery Chapel, the Elisabet Ney Museum, the O. Henry Museum and Mayfield Park.

In the past the department has received hotel tax revenue through the ACVB’s Heritage Grant Program, which works in conjunction with the city's Historic Landmark Commission to issue money for historical preservation twice a year. McKnight said the grant program “imposed restrictions” because it involved many hours of staff time to write the grant without the guarantee the department would receive the grant. She said the program also has a limit on what capital projects it can be used for.


“There’s kind of a bottomless pit of projects that we could pursue, and we’re very eager to diversify our funding stream." —Kim McKnight, Austin Parks and Recreation Department environmental conservation program manager

ACVB President and CEO Tom Noonan said although he is happy the department received the money, he is concerned about the visitor bureau's unpredictable budget in the coming years.

Representatives from several environmental conservancies, including the Shoal Creek Conservancy and the Barton Springs Conservancy, also spoke in support of using tourism funds for parks.

“People come to Austin for our music, our food and they come for the outdoors,” said Joanna Wolaver, executive director of the Shoal Creek Conservancy. “We really are a parks destination for tourists around the world.”

She and JJ Langston, Barton Springs Conservancy executive director, outlined four recommendations for how to use hotel taxes:

"I think that parks and music are two of the core brands [that bring tourists to Austin]," he said.

The task force will spend the remainder of its meetings deliberating recommendations to give to City Council. Its final meeting is May 23.
SHARE THIS STORY