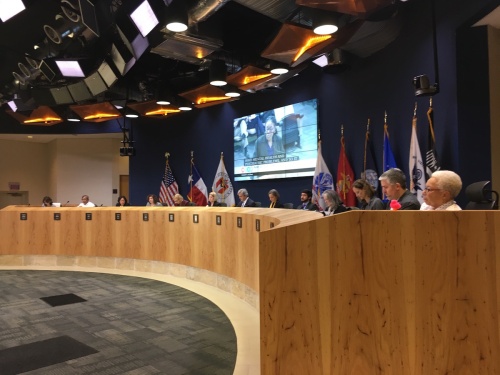 In the wake of several postponements since Dec. 15, Austin City Council says it will hear the second reading of the controversial Austin Oaks planned unit development at its Thursday meeting.

Council said it will revisit the PUD rezone request approved in a 7-1-1 vote on a first reading in December no later than directly after its 5:30 p.m. dinner break Thursday, March, 23. Following three postponements, the council was set to hear the item on March 2, but it was subjected to a fourth postponement after debate over Plaza Saltillo—another controversial zoning case—nearly took the council to midnight.

The applicant Spire Realty seeks to turn an underused office park at the southwest corner of MoPac and Spicewood Springs Road into a roughly 1 million-square-foot office, hotel, retail, and apartment development that proposes 865,900 square feet of office space, 12,800 square feet of restaurant space and 90,000 square feet of hotel space. The plan also includes 200 apartments, 10 percent of which have been offered at 60 percent of the median family income for renters, and 80-percent MFI for ownership. The development will also provide 8.5 acres of dedicated parkland, and the developer will provide $1.5 million for the development of a neighborhood park.

Traffic concerns take center stage
During Tuesday’s work session, District 10 Council Member Alison Alter stated she would continue her push to increase the developer’s responsibility for traffic mitigation, which she said is the focal concern of residents in the area. Alter said a failure to fully mitigate traffic concerns could have a ripple effect throughout the city.

“If we do not address traffic, we will potentially be causing problems throughout our system which we’ve been working so hard to improve,” Alter said.

City staff has identified slightly more than $2 million in traffic improvements that would be necessary in the wake of the PUD. The city uses a pro-rata method in requiring the developer to fund traffic mitigation for developments, which equates the financial responsibility to the amount the development contributes to traffic issues. In this case, staff recommends the developer pay $628,000–or just over 31 percent. The Zoning and Platting Commission recommended $805,000 while Alter is pushing for the full $2 million.

@TopherJNeely @ALTERforATX yeah traffic on Spicewood Springs could be insane. I'm so worried about this development.

District 4 Council Member Greg Casar doubled down on his desire to at least double the amount of affordable housing offered by the developer. Of the 200 residential units proposed—a number Alter said “mysteriously” decreased from 250—20 are pegged as income-restricted, with the requirement that 50 percent be two-bedroom units.

On Tuesday, Casar said he is less concerned with the path the council takes to doubling the amount of affordable units, rather just that they get there.

Passage will require a supermajority

The Austin Oaks PUD follows the hotly contested Grove at Shoal Creek project, which took a year of deliberation, public hearings, and mediation over which to reach an agreement. The Austin Oaks project has been discussed for more than two years. Spire’s original proposal, which included 17-story buildings, was largely objected by surrounding neighbors. However, in 2015, the developer agreed to work with the neighbors in designing a new development.

The new proposal splits the surrounding neighbors in support. Members of the Northwest Austin Civic Association support the project as proposed, however, a valid petition was filed with more than 27 percent of surrounding neighbors objecting the development. The objectors, as Alter said, focused their opposition on traffic and environmental issues. The valid petition means at least nine votes will be required for the zoning change to pass.

Thursday's other agenda highlights include: