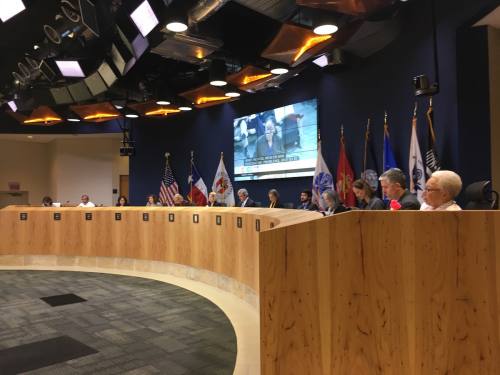 The Affordability Action Plan, a proposed plan that evenly received heavy critique and praise from Austin City Council members during Thursday's meeting, was postponed indefinitely after a lengthy debate.

The five-part Affordable Action Plan garnered support from local business leaders and nonprofit organizations for its wide-breadth and inclusion of different groups in its drafting.

Ann Howard, a representative with One Voice Central Texas, said the plan was the first she saw that placed a heavy focus on health and human services.

Rebecca Melancon, executive director of the Austin Independent Business Alliance, said she was "pleased" that the plan included local businesses in the affordability conversation.

Traci Berry, senior vice president of community engagement and education for Goodwill Central Texas, also issued a response to the potentially permanent postponement via the Greater Austin Chamber of Commerce.

"There is a reason that 82 percent of Austin voters believe that Austin has an affordability issue," Berry said in a statement. "Postponing indefinitely this most pressing issue sends a negative message to our community, especially for those in need."

The plan hit on housing and real estate, local economy and business support, the budget process, the cost of living and transportation.


“This is filled with things we are already doing, can’t be done, or shouldn’t be done.”

Some council members criticized the plan for appearing to take credit for initiatives that were already underway. Others felt it mirrored the affordability action plan recommended by an Austin Chamber of Commerce coalition a week earlier.

“This is filled with things we are already doing, can’t be done, or shouldn’t be done,” said Garza, who called the plan too prescriptive. “I cannot support this.”

Garza also said the plan’s proposal to produce a budget illustration that wouldn’t increase taxes or fees was not realistic and would tie council ‘s hands in implementing a variety of initiatives.

“This plan would pre-emptively adopt goals from efforts currently in draft form and undergoing public review processes,” Mayor Pro Tem Tovo said in a press release put out Thursday morning by Garza’s office. “We need to be clear with the community about our existing and post affordability efforts; however, I fear that this resolution does little to advance those endeavors.”

The plan’s sponsors–Troxclair, Mayor Steve Adler, Houston, Flannigan and District 5 Council Member Ann Kitchen–said the plan was not meant to take credit for others’ work. Rather, it was intended to organize all of the ongoing affordability initiatives.

Alter, who provided the vote that sealed the postponement, said she wanted to see a plan that focused less on planning and more on directing more action.