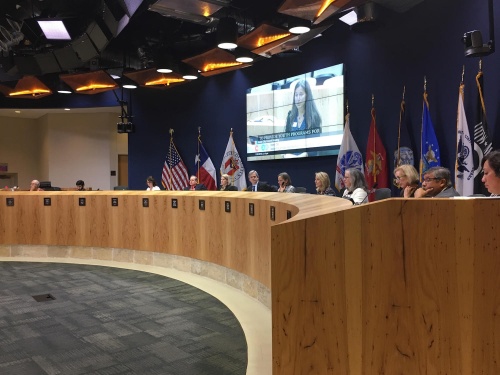 The Austin City Council may be looking at an overhaul of its committee structure after some council members voiced their displeasure with its inefficiency.

Austin City Council might overhaul its committee structure in 2017 if one council member’s proposal comes to fruition.

Late last month, District 7 Council Member Leslie Pool introduced sweeping changes to the council’s existing committee structure. The proposal, posted on the council message board, recommended that some committees be eliminated, combine others and include the mayor in the committee process.

Mayor Pro Tem Kathie Tovo and council members Ora Houston, Delia Garza and Ann Kitchen supported the proposal, according to Pool’s post. The topic will likely be discussed when the mayor and council hold their annual council retreat next week.

The council currently has 10 different committees, each filled with four council members—with the exception of the Austin Energy Utility Oversight Committee, which is comprised of all council members. Committees vet different initiatives often recommended by the council-appointed commissions and allow council members more time to learn about a specific topic before going to the full dais.

Some council members worried some committees were repetitive and duplicated work done by council-appointed commissions. Pool said the existing structure also minimized impact because four council members was not enough to affect agreement on policy change.

“To some extent, the things we’ve been doing over the last two years has been trial and error,” Pool said.

Pool told Community Impact Newspaper that council looked to the Texas Legislature’s committee structure as a model when the 10-1 council was formed. However, two years year she and other council members see ways in which the structure can be improved to maximize efficiency, Pool said.

Tovo said the election of two new council members and re-election of three others provides an opportunity to reexamine the existing structure.

“As a council, we agreed to continue to evaluate and re-evaluate our council procedures and the committee system on a regular basis,” Tovo told Community Impact Newspaper. “I believe paring down the number of committees and decreasing meeting length will help us maximize council and staff time and efficiency without compromising public input and council deliberation.”

Pool said Mayor Steve Adler was supportive of the restructuring proposal, and she suggested that 2017 be a year where the council utilizes ad-hoc committees created for the sole purpose of deliberating a specific, timely topic, which then expire after the issue is resolved. Mayor Adler was unavailable to comment before press time.

Council is expected to discuss the committee structure overhaul at its Jan. 11-12 retreat. Pool said action could be taken by late January or early February.