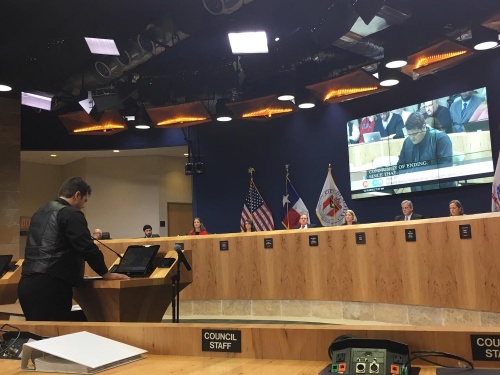 Michael Peterson has been a licensed chauffeur in Austin for over 30 years. However, he was put out of work after council made it harder for those with criminal backgrounds to obtain chauffeurs permits. Peterson said the crime he committed happened over 30 years ago.

Those with criminal records will again have an opportunity to earn a living as a licensed chauffeur in Austin after City Council amended an ordinance passed in June that put several people out of work.

When a more restrictive chauffeur’s permit eligibility ordinance went into effect June 27, the city law added 14 crimes that automatically disqualified an applicant from a chauffeur’s permit, which is necessary to legally operate a vehicle for a transportation network company–or TNC, such as a ride-haling service like Fasten or Ride Austin.

The crimes ranged from criminal homicide, robbery and aggravated assault, to kidnapping, criminal use of a deadly weapon and promotion of prostitution. No appeals process could prevent a permit denial for anyone convicted of these crimes. There is also a list of 10 other crimes that have a seven-year statute of limitations when it comes to permit eligibility.

The June amendment aimed to make TNCs safer for customers, but it also had what District 2 Austin City Council Member Delia Garza described as an “unintended consequence” by eliminating the eligibility of many who have been legally driving as a living for years.

Prior to the amendment, approval of these permits were at the discretion of the transportation director and, if a person was denied, there was a clear appeals process set in place. However, the new amendment incidentally stripped that discretionary power from the director and eliminated the appeals process for the 14 listed crimes.

Since the amendment went into effect in late June, 118 applications had been denied with no opportunity for an appeal, according to Robert Spillar, the director of Austin’s Transportation Department.

Michael Peterson, who has been driving as a licensed chauffeur in Austin for 30 years, was among those denied and abruptly placed out of work. He said the crime in question was committed over 30 years ago, and he has lived a clean life since.

“When I came to Austin, I was looking for a second chance and I was afforded that opportunity by getting a chauffeur’s license,” Peterson said. “Now with the change to the ordinance, 30 years of work of living right doesn’t seem to matter, and has put a distinct uncertainty to my family’s future.”

There are several stories similar to Peterson’s. Christopher Bedford, the owner-operator of SuperShuttle, said he has been earning an honest living through his business for several years, but like Peterson, he was denied the crucial renewal of his chauffeur’s permit for a crime he committed more than a decade ago.

“I was young and I lived a different life, but I’ve maintained a clean background for over 13 years now,” Bedford said. “But my business is suffering. It’s been three months now [since I was denied renewal] and my business is going down the drain. I don’t know what I could do if I can’t drive anymore. I would have to start all over.

“Hopefully people will see that people can, and do, change.”

On Thursday, City Council unanimously approved an amendment to the ordinance that immediately reinstated the appeals process. Those denied a permit will have the chance to make their case to the transportation director.

However, the appeals decisions may not rest with the city's transportation director for long. Garza questioned why the transportation director, and not a municipal judge or licensed legal professional, would determine the effect of someone’s criminal history. Council added another amendment that called for the city manager to explore who would be the best fit to consider chauffeur’s permit appeals.