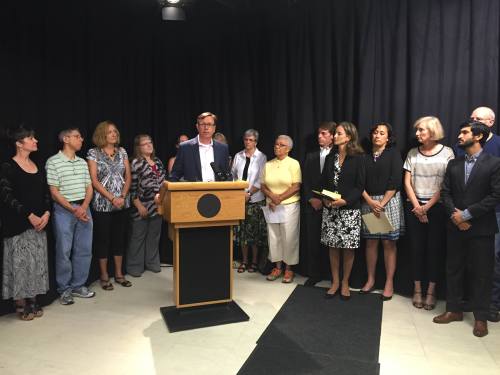 Austin coalition One Voice and some Austin City Council members voiced support to increase funding for Health and Human Services.

A long list of Austin organizations and some City Council members during an Aug. 25 event urged more spending in the Austin/Travis County Health and Human Service Department budget for fiscal year 2015-2016.

The human services leaders proposed a $6.7 million budget increase to provide more funding to city health initiatives and partnerships, which help vulnerable populations. The Health and Human Service Department initially proposed to City Council a $79.2 million budget for 2015-16 fiscal year. That is up from $76.9 million the department received in 2014-15.

Tod Marvin, chairperson of One Voice Central Texas, a 75-member coalition of nonprofit human service groups, said the funding would help individuals who are struggling to make ends meet.

"The rapid growth in Austin has accelerated an affordability crisis," said Marvin, who is also CEO of Easter Seals Central Texas. "There are so many things we love about Austin our prosperity and popularity have made headlines around the globe, but what we don't care about as much as some of the statistics revealing a tale of two Austins that exist in our community."

One-third of the population can barely make ends meet, one of out of every four Austin children live in poverty each day and 25 percent of renters spend more than half of their income on housing, Marvin said.

"Health and Human Services are a vital link to ending this disturbing tale of two Austins," he said. "These critical services are necessary to help all Austinites reach their potential."

With the growing poverty rate in Austin, funding for Health and Human Services has not kept up to meet the need, Marvin said.

Mayor Pro Tem Kathie Tovo of District 9 said her vision for Austin is not one of two cities, but of one Austin that meets the needs of all citizens. She said she wants to increase investments but is unsure if the $6.7 million goal can be reached.

Tovo said development fees should increase 100 percent year-over-year, which would net the city an additional $1 million to potentially go toward Health and Human Services needs.

"We are committed to ensuring that the revenue is increased so we can begin to address some of the many health disparities that we and some of our families suffer," Houston said.