On June 26, after five weeks of being allowed to open their doors, Texas bars had to shut down again. Coronavirus case numbers were surging in Texas; videos were circulating on social media of large crowds packed together at bars, ignoring capacity guidelines; and after underground stings, the Texas Alcoholic Beverage Commission shut down some bars that were not playing by Gov. Greg Abbott's rules.

Abbott said he regretted opening bars so quickly, telling television station KVIA in El Paso, "If I could go back and redo anything, it probably would have been to slow down the opening of bars, now seeing in the aftermath of how quickly the coronavirus spread in the bar setting."

More than a month after the second bar closure, the move appears to have been effective from a public health perspective. Cases locally in Austin and around the state began to dip in late July and early August after a concerning early summer spike. But bar owners are struggling to hang on amid the continued shutdown.

On Aug. 7, the Texas Alcoholic Beverage Commission released an industry notice outlining the rules regarding how bars can reclassify as restaurants to open their doors legally under the governor's orders.

"This has resulted in more businesses—including breweries, wineries and distilleries—being able to open up while still complying with the executive order," TABC Executive Director Bentley Nettles said.
RELATED STORIES

• Austin will send $460 million transportation bond to voters in November

As restrictions remain in place, rules shift and the virus continues to have a presence in the community, local bar owners are doing what they can to safely offer services to customers, cut through the red tape and hang onto their businesses. 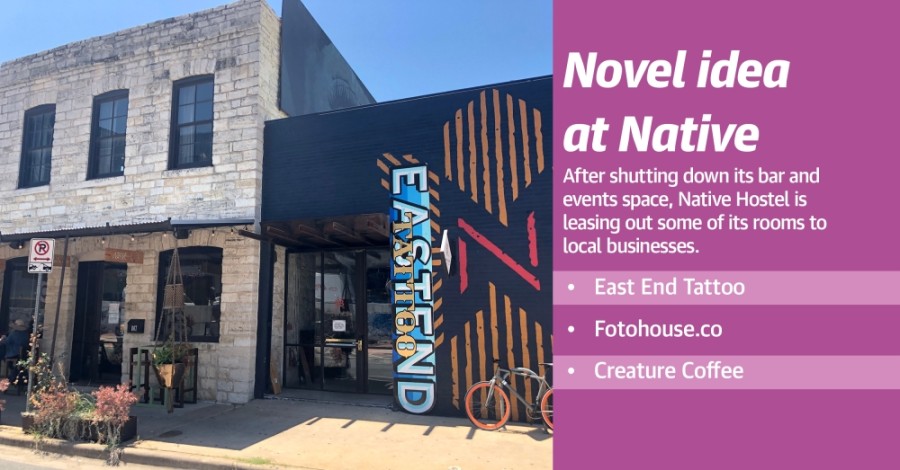 "There's a difference between surviving and thriving," said C.K. Chin, an ownership partner at Native Hostel. Right now, Chin said the business is in survival mode.

Before the pandemic, Native Hostel offered both private rooms and communal hostel spaces for nightly stays. Now, it has converted some of those rooms to retail spaces and shifted its residential model to allow short-term rentals for longer stays of weeks or months.

Chin envisioned the commercial spaces could work for any business owner who does not rely on having a lot of people in one space at one time—such as a podcast studio or a barbershop.

East End Tattoo was one of the first businesses to take advantage of Native Hostel's new model, leasing a small room in June after moving from its previous location at Yellow Jacket Social Club when the owners sold the building.

Owner Raul Arevalo is only allowing one client in at a time for now. Whenever the pandemic subsides and foot traffic increases in East Austin, he hopes business will pick up, but for now he is happy with the move, he said.

Chin said the state government's approach to bars has been heavy handed. He described it as "using a light switch instead of a dimmer," but until the rules change, the onus is on the business owners to adapt.

"There are some businesses that might be OK that don't have to change all that much, but most of us will have to. The faster we admit that to ourselves, the better," he said. 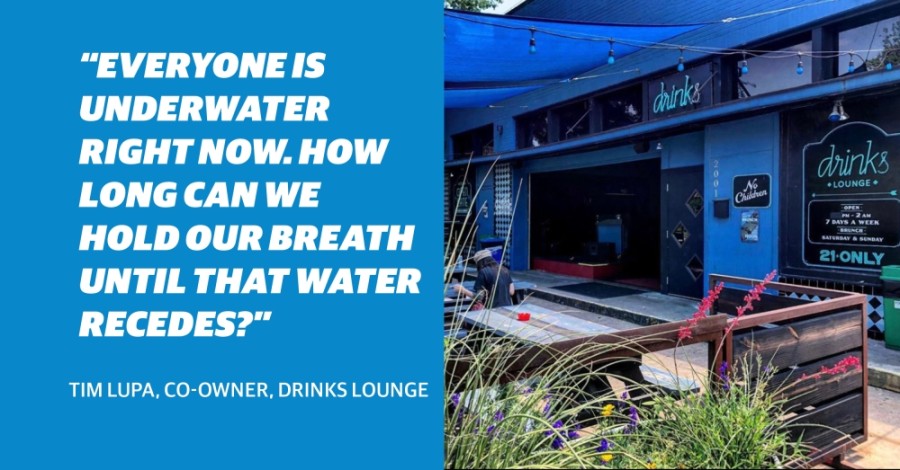 When bars were allowed to open briefly in May, bar owners Tim and Sara Lupa went to work changing their model. They stuck with takeout at East Austin spot Drinks Lounge until they could figure out a safe way to allow customers back—cutting the number of tables down from 30 to seven, changing the layout of the bar, setting up a reservation system and training staff.

Finally, in late June, they were ready to debut the new model and open the doors, but they never got a chance: The second shutdown occurred just as Drinks Lounge was going to open.

Not all that work is going to waste though. Tim Lupa said the bar is working on pivoting to a restaurant model, as it has an in-house kitchen; most customers who come in get food with their drinks anyway, and it fits the laid-back neighborhood vibe of the spot. He hopes it will allow Drinks Lounge to survive.

"A big wave came through. Everyone is underwater right now. How long can we hold our breath until that water recedes?" he said.

After working with the TABC on licensing and changes to the business model, Lupa said he was hoping to open a few tables to generate enough business to keep the doors open and keep the employees on staff.

"It’s the people in there every day, interacting with the customers [who make the business succeed]. If we don’t have them, we don’t have Drinks Lounge," he said. 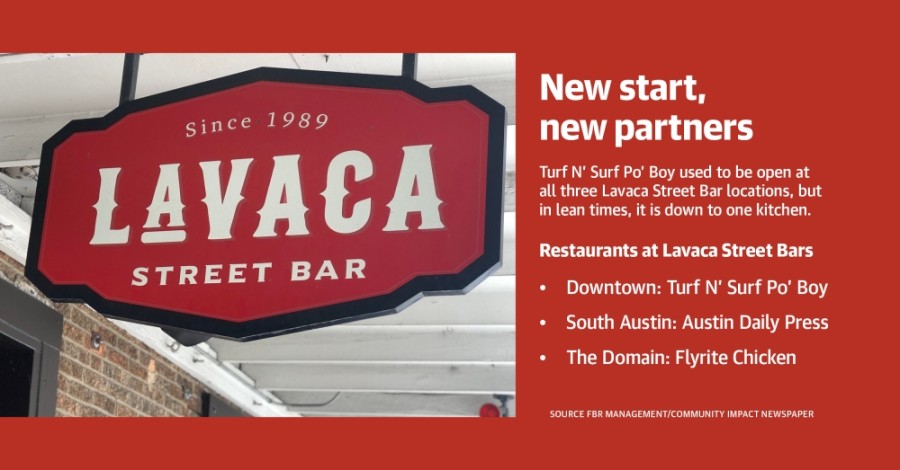 Max Moreland—partner and director of operations at FBR Management, the group that runs Lavaca Street Bar, Lala's, Dumont's and other Austin bars—said he remembers exactly when the June 26 shutdown was announced: It was 10:22 a.m., he said, and bars had to close by noon. He remembers because he had employees who had already fed meters to park and were ready to show up for their 10:30 a.m. lunch shifts.

After closing again with that 90-minute notice, Lavaca Street Bar's locations in South Austin and downtown opened in late July as restaurants. The third location, in the Domain, is expected to follow suit in August. To abide by the TABC regulations and receive less than 51% of revenue from alcohol sales, each bar will close down early; they eliminated their late-night hours and close when the kitchen closes.

Moreland said it is a completely different customer experience now at Lavaca Street Bar. Instead of congregating, socializing and chatting with friends at the bar, guests come in, sit down, order food and drinks from a server, and leave after their meal.

"I understand safety first. We're being as safe as we can. We need to be kept in the loop on how to do it properly," he said. 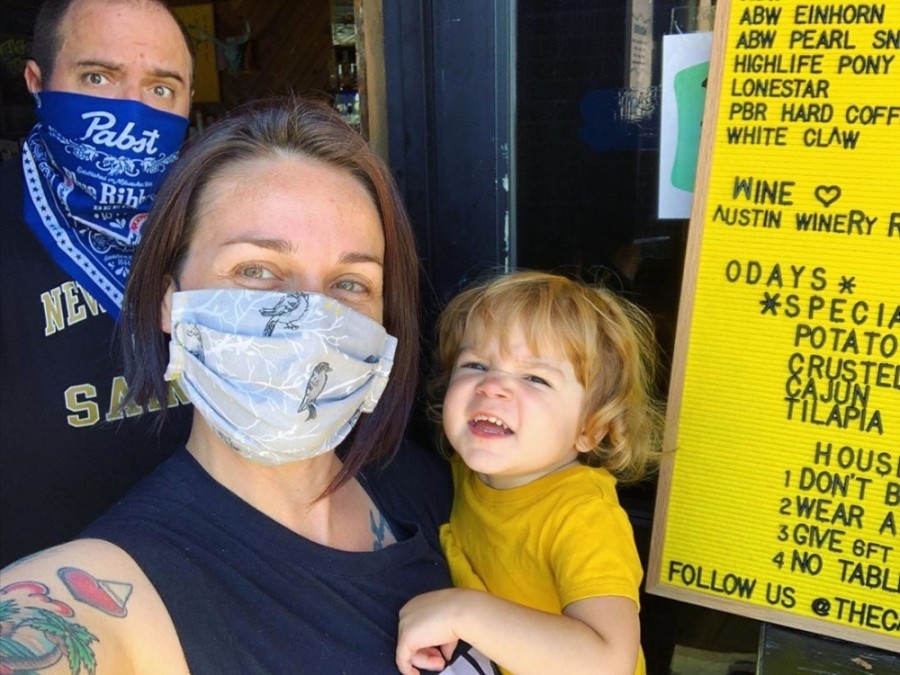 Rachelle Fox did not fall into the service industry; she and her husband, Chadwick Leger, the owners of East Austin bar The Cavalier, chose the hospitality industry because, as Fox said, they feed off the energy of serving and caring for people.

Fox and Leger are doing all they can to hold onto that mission and stay connected to their customers without dine-in service. They are planning to open their patio soon at a limited capacity, they are serving food and drinks to-go from The Cavalier's window, the bar just started a delivery service, and they are offering fresh produce as part of the Sustainable Food Center's neighborhood pop-up grocery program.

Fox was seven months pregnant with her daughter, Sunny, when The Cavalier opened in 2018. The staff and customers at the bar have watched the family grow, and she hopes to manage through this difficult time long enough to make those connections in person again soon.

"We’re not a rowdy, downtown, late-night bar. The folks here are our regulars and friends; they’ve also watched her grow up. She misses them," Fox said.