Business owners band together in effort to keep Austin local 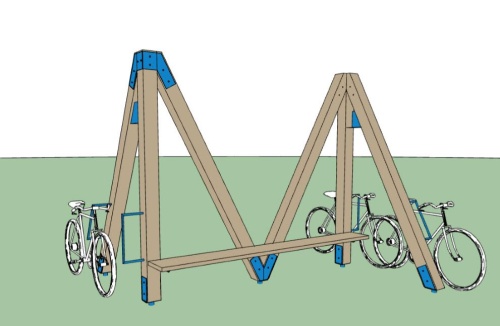 A new bike rack was recently installed at the entrance to the Manor Road corridor.

In 2014, Joshua Blaine, then the manager of In.gredients on Manor Road, oversaw the planning of a monthly neighborhood block party at the Austin grocery store.

He talked to the owner of Hoover’s Cooking down the road and realized they shared a vision for a street-wide community event that would bring Austin residents to Manor and support its local businesses.

Around the same time he attended a meeting of the local neighborhood association. Of the 70 or so people in attendance, only five or six were local business owners. When the ensuing discussion turned to parking, they were outnumbered.

The association’s members wanted residential permits, but the local businesses needed parking for their customers.

“There was a clear need for an organized, unified voice,” Blaine said.

Local business owners or managers don’t have time to go to City Hall, wait in a line for hours and lobby council members for better parking on Manor Road, Blaine said.

But a merchants association could.

“These are the places that have put Austin on the map,” the director of Souly Austin Nicole Klepadlo said.

To support them, the city needed an organized, grassroots and self-sustaining entity with which to deal.

Once the association was formed, Souly staff worked with the leadership to identify the district’s priorities.

In the case of MRMA, business owners wanted improved sidewalks, bike racks and events programming that would incentivize people to patronize the district.

Souly then provided a $20,000 activation award to the association to help achieve some of these goals.

“A lot of people wanted to get involved after they heard that we were getting all this grant money because everyone wants to have a say in how it gets spent,” Krystel Kelley, business manager of the Vortex theater and a founding member of MRMA, said.

Since then, MRMA has organized Manor Mondays to help offset a shared problem among its member businesses: slow Monday nights. It also designed and distributed a bingo card that rewards patrons who attend multiple Manor businesses and oversaw the installation of a bike rack at the district’s entrance.

“Any time businesses can band together, it’s going to be a boon for all of us,” MRMA member and Haymaker owner Keith Sandel said.

Like Manor Road, the Lo-Burn IBIZ District on Burnet Road between 44th Street and North Loop Boulevard appeals to local businesses because of its central location and affordability relative to downtown.

Charlotte Wainscott, owner of Charlotte’s Fiesta Flowers, moved her business to Burnet in 2012 after being forced out of her original location at North Lamar Boulevard and 38th Street, a strip mall that was converted into a mixed-use development.

But Burnet is not as accessible as it was even five years ago.

“I’m glad I bought something when I did because now the prices are crazy,” Wainscott said of her current location.

Like Souly Austin, the IBIZ Districts program provides funding and administrative support to established commercial districts in Austin. To qualify, at least 75 percent of the businesses in the district must be local."

While AIBA has helped market the district and coordinate events such as an upcoming holiday shop hop, it cannot address all of the local business owners’ concerns.

“All these new businesses and condos and apartments are being built, but the streets aren’t any wider and there’s no additional parking,” Austin School of Classical Ballet director Jennifer Felkner said.

The district, she said, is at risk of becoming overpopulated and straining its relationship with the surrounding community.

The gentrification of Manor has caused similar growing pains.

“The irony is that with Souly and MRMA bringing more business to this corridor, it’s bringing more value,” Blaine, now the director of MRMA, said. “When we get more public art on the streets and we get better sidewalks and we bring in new businesses, that raises our very own property taxes and our very own rent.”

Despite the significant challenges of rising costs and increased competition, both MRMA and the Lo-Burn districts are growing.

“I would still come down on the side of I’m glad this [Souly Austin] program is there and helped to form [MRMA] and that we’re doing good things, even with our limited resources,” Blaine said.

Eve Richter, the director of the IBIZ Districts program, said it is up to Austin residents to choose local, even when national chains or online giants seem more convenient or affordable.

“Nobody can survive without our support,” she said, even with the increased leverage and funding that forming a business district can provide.

“If you’re proud to be an Austinite, act like one,” she said. “Support those businesses that represent your values.”
SHARE THIS STORY