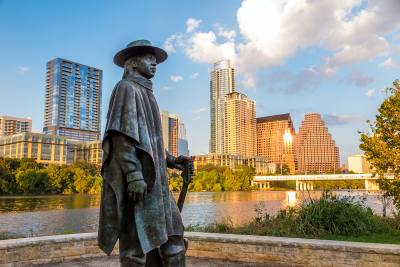 A statue of legendary Austin musician Stevie Ray Vaughan stands with downtown Austin in the backdrop.

Musicians and songwriters looking to launch a professional career in Austin can get answers to questions and insight into the process at a free music panel discussion co-presented Tuesday by the Music and Entertainment Division of the city of Austin’s Economic Development Department and Texas-based music promoter ScoreMore Shows.

The discussion will take place from 7-9 p.m. at the offices of Google Fiber, 201 Colorado St., Austin. Attendance is free with an RSVP at http://scoremoreshows.com.

A longtime member of the platinum-selling alternative rock band Blue October, Noveskey said he started production work about 10 years ago and went full-time a few years later. He opened the 6,000-square-foot Orb Recording Studios in 2014 with the intent of launching a high-quality studio in Austin, he said when reached by phone.

With two studio rooms, Orb caters to both local and international clients. Orb’s client list includes Jason Boland and The Stragglers, Skrillex, Justin Bieber, Chance the Rapper and The Beach Boys, according to Noveskey.

“We’re totally outfitted with drums, bass, guitars, amps, pedals: everything you would need if you flew in for South by Southwest or ACL or whatever it is,” Noveskey said. “You would not have to bring a single thing with you; you could record a record from start to finish with us.”

Orb’s success is due to the thriving musical climate in Austin, he said.

“Austin—I like to say—is pretension-free. … I’ve lived in different places; I’ve traveled the world for the last 20-something years, and I honestly think that Austin is a perfect place for us and the reason is there’s a network of incredible musicians here—some of the best players on the planet,” Noveskey said.

Alex Lopez, deputy director for the economic development department, said in a news release the city is pleased to co-host a second discussion with ScoreMore Shows.

The first discussion, "Marketing Music in Austin," attracted more than 200 attendees in December, according to the news release.

For his part, Noveskey said he is excited about the city’s prospects to raise Austin’s music profile ever higher.

A Detroit native, Noveskey noted that musicians often work together in Austin, which was not the case in Michigan.

“People want to help each other out here,” he said. “And when I first moved here in ’98, I felt that immediately.”
SHARE THIS STORY