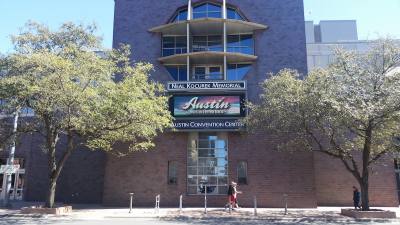 A proposal for the expansion of the downtown Austin Convention Center is expected to be voted upon by Austin City Council later this year. A panel of Austin hoteliers convened Tuesday afternoon to voice their support for an expanded convention center.

"We’re turning away opportunities, and we’re letting other cities capitalize on it because our convention center is too small," said Drew McQuade, the General Manager at the downtown W Austin Hotel.

The Visitor Impact Task Force has been meeting for several months, gathering input from various Austin departments and groups that are affected by tourism.

The four hoteliers told the task force an expanded convention center, which has not yet been approved by the Austin City Council and has no official design, is key to keeping hotel tax revenue growth on an incline.

"The expansion is not only going to impact downtown," Jensen said. "It’s impacting the Austin district as a whole."


The business of conventions

Some hotels, such as the Fairmont Austin, the JW Marriott Austin and the Hilton Austin, get their business mostly from conventions, according to Manchester.

For other hotels such as the W Austin, the Omni and the Hyatt Regency, much of their business comes from transient guests visiting Austin for pleasure.

"The reality is, everyone wants to come to Austin," Manchester said. "But frankly, we can’t accommodate them as the number one offering because we lack the infrastructure."

When conventions are in town, McMenamin said he is able to raise rates for his Omni Austin Hotel at Southpark, located about 4 miles south of the convention center.

But with more hotel rooms coming to Austin in the future—the Fairmont Austin, once open in August, will bring an additional 1,048 rooms alone—Tom Noonan predicts there will be less occupancy, meaning rates will drop.


"The reality is, everyone wants to come to Austin. But frankly, we can’t accommodate them as the No. 1 offering because we lack the infrastructure." —Fairmont Austin hotel developer Doug Manchester

As president of the Austin Convention and Visitors Bureau, which markets the city as a tourism destination, Noonan said there will be an 84-percent increase in downtown hotel room inventory by 2019.

Meanwhile, the convention center is losing 50 percent of its business because of lack of space or scheduling conflicts, Noonan said.

According to the ACVB, 19 groups have already been placed on a potential cancellation list should the so-called bathroom bill go into effect later this year. The bathroom bill would mandate people use the bathroom with which they biologically identify.

Nineteen groups pulling out of Austin Convention Center commitments would mean 52,700 attendees and 103,392 hotel room nights would be lost, according to the ACVB.


Paying for the expansion

No matter the method in which the proposed expansion is funded—whether by increasing the hotel occupancy taxes by 2 percent or refinancing the current debt from the first convention center expansion—hoteliers said they will be affected.

Anyone who owns, operates, manages or controls any hotel, or anyone who collects payment for occupancy, is subject to the hotel occupancy tax, meaning if the city votes to raise the tax, hotel rates will increase.

If the hotel tax remains at 15 percent and the current debt is refinanced, an estimated $397 million would be allocated for the expansion. The convention center would pay down debt on both the previous and new expansion at the same time, resulting in a limited debt capacity. Once the first expansion center debt is paid off, the hotel tax would be lowered to 13 percent.

Manchester said paying off the existing debt first was the "fiscally responsible" approach to paying for a future expansion and would make Austin more competitive, because hotels would not have to raise rates.

"It’s imperative—if we are going to continue to compete—not to become a second-class convention city," said McMenamin.


How to use tourism dollars

The Hyatt Regency's Jensen said the way the city currently spends HOT taxes—by giving 4.5 percent to pay off convention center debt service and operating expenses; 2 percent to pay off the original expansion bond, as well as a small portion of the Waller Creek Tunnel Project; 1.45 percent for ACVB contracts; and 1.05 percent for the cultural arts fund—is "right on target."

He said he wanted to ensure that ACVB did not lose funding, because "we need to get them the tools to continue to increase hotel occupancy taxes."

Manchester said he wanted to continue to fund the cultural arts, which make Austin "authentic."

"What we're talking about here is supporting an industry that not only ensures our success but the success of the industry as a whole to actually support every single characteristic of what makes Austin great," he said.

The task force is responsible for examining whether the way the city currently spends HOT tax money should remain the same or change. Members have until June to present recommendations to Austin City Council.