Historic Bryson Farmstead in Leander could be revitalized

A historic farmstead in Leander may finally get the attention that was planned for it more than a decade ago.

The J.C. Bryson Farmstead, a Recorded Texas Historic Landmark near the intersection of Toll 183A and San Gabriel Parkway, has a history of being overlooked. It was given its landmark status in 1970 but went unnoticed when the Central Texas Regional Mobility Authority was completing mandatory surveys leading up to the construction of Toll 183A in the early 2000s.

In 2006, as the Mobility Authority was designing the intersection of Toll 183A and San Gabriel Parkway, the property was rediscovered. The Federal Highway Administration determined construction would adversely impact the farmstead, so construction halted.

“We had to work with various parties to make sure that our impact was minimal and that there was a lasting enhancement fund for the [farmstead],” Mobility Authority Executive Director Mike Heiligenstein said.

Negotiations ensued among federal, state and local entities until a memorandum of agreement was reached in 2008 that ordered the Mobility Authority to put $1 million in an escrow account for the purpose of preserving the Bryson Farmstead—a task the city of Leander was to undertake.

Fast forward to 2019, and it seems the property has once again fallen by the wayside. While the city of Leander began the first step in developing a master plan for the farmstead in 2011, planning stopped in 2013, according to city documents. The property was also never deeded over to the city, as the agreement ordered, until now.

During a meeting Oct. 17, Leander City Council voted unanimously to accept the deed to the property. The city will now coordinate with Leander and Williamson County historical commissions to determine next steps for preserving the farmstead, according to Leander city spokesperson Mike Neu.

“We don’t know why the project had never moved forward at the time,” Neu said. “It recently came to our attention again, so we’re trying to finish what we started.”

The property might have continued to fly under the radar if it were not for Nancy Bell.

Treasurer of the Williamson County Historical Commission, Bell was surveying historic sites throughout the county in 2018 when she came upon the Bryson Farmstead. After learning the Mobility Authority owned the property, she got in touch with the agency and was granted access in November 2018.

The 6-acre farmstead features a house, cistern and barns. Bell said when she approached the house, she noticed graffiti in the kitchen.

When she learned about the 2008 agreement, she said she met with city of Leander staff to bring the property to their attention.

“The house has not been kept as it was supposed to in the agreement,” Bell said.

The Bryson Farmstead property was originally about 225 acres and previously owned by Sam Winters and Roy Butler, both of whom have since died. As part of the 2008 agreement, the property owners were asked to make 6 acres, which included the main historic structures, such as the barn and house, available to the Mobility Authority. The 6-acre property would retain its historic eligibility while the rest would not.

Within 120 days after the conveyance of the tract to the Mobility Authority, the tract was supposed to be conveyed to the city of Leander, which would be responsible for keeping the property for preservation purposes, according to the agreement.

The property was deeded to the Mobility Authority in 2009, according to Williamson County documents. Why the tract was never conveyed to the city until more than a decade later, though, is unclear.

Heiligenstein said the Mobility Authority has wanted to get the property off its hands and has worked to draft up deed transfer documents in the past.

“Those deeds have been flying around for a long time, and they just never got any attention,” Heiligenstein said.

The city said in a written statement that a 2012 draft deed was not ready for approval at the time, and the city is not sure why the issue was not resolved sooner.

There is at least one person who has been paying attention to the farmstead over the years. Kent Talley, a local rancher, said he leases about 80 acres of land off Toll 183A in the Leander area, including the 6-acre Bryson tract. He bales hay on the property, which he visits almost daily, he said. Talley said his son and grandchildren lived in the house for a period.

About a year ago, Talley said people—likely kids—were breaking into the house. He said he notified Leander police and put up surveillance cameras.

“There was a little bit of vandalism done inside, but I haven’t had any problems since just that one time,” Talley said.

In early November, Talley said he had not been notified yet of the city’s plans for the Bryson Farmstead.

The city did take steps toward rehabilitating the property back in the early 2010s.

The $1 million escrow fund for the Bryson Farmstead was established in 2011, according to city documents. The city can use the funds for the following purposes: to develop adaptive-use options for the property, conduct studies to develop a preservation plan to guide the structural rehabilitation of the buildings, develop educational materials for local schools and the public, and carry out the preservation plan, according to the 2008 agreement.

In 2011, the city contracted with the firm Coleman & Associates to develop a master plan for the 6 acres, a project that was split into multiple phases and would cost $37,000. A portion of the planning was completed for $14,861.35, according to city documents.

Then in 2013, the City Council at the time agreed to spend $300,000 of the escrow funds on sidewalks along Mel Mathis Boulevard.

“The rationale [was] that people could come up on the train and get over to the farmstead,” said Pix Howell, who was the city’s urban design officer at the time. “Of course, since the farmstead has never been refurbished or dealt with at all and has no access, it’s kind of a sidewalk to nowhere.”

Another part of the story is that at the time, the city was being offered a $4 million Texas Department of Transportation grant to construct Mel Mathis Boulevard. The grant required a $1 million match, Leander Finance Director Robert Powers told Leander City Council during a recent October meeting. Despite receiving landowner contributions and using some general fund revenue, the city was still $300,000 short.

“The city was looking at losing a $4 million grant or coming up with the funds,” Powers said in October.

When the current Leander City Council discussed the farmstead Oct. 17, several expressed concerns about the use of the funds on sidewalks.

“I’m shocked that $300,000 was spent on sidewalks for Mel Mathis because the way I read the memorandum of agreement, it doesn’t permit for that,” Council Member Marci Cannon said.

Powers said that since the city is healthier now financially, the city could amend its budget and restore $300,000 to the Bryson Farmstead fund in the future.

Planning for the Bryson project halted after 2013, according to the city. One reason for that could be staffing changes. Howell, who had been overseeing the project, vacated his position in 2013, and his job was never refilled, Neu said.

The Bryson Farmstead was constructed in 1872 by J.C. and Nancy Bryson, who came to Central Texas from North Carolina. The 225-acre property featured livestock grazing, cedar harvesting, cash crops and subsistence farming, according to the Library of Congress.

The Bryson family was one of the five founding families to settle in the Leander area, according to Karen Thompson, chair of the Leander Historical Preservation Commission. She said it is important that the property be maintained so people can learn about what the area was once like.

“We don’t have another farmstead that tells about the rural life,” Thompson said.

The city almost halted the revitalization of another historic place in Leander—the Davis House in Old Town—in 2018. After hearing from locals, council opted to start exploring options for the house in March. Kathy Howell, Leander resident and Thompson’s daughter, founded a nonprofit called Friends of the Davis House to support it.

She said she hopes the city works to revitalize the Bryson Farmstead and said it could be turned into a pioneer farm or a museum. 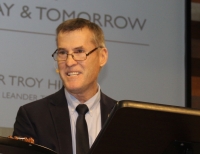 Rooftop restaurant and Whataburger: Leander mayor lays out vision in state of the city speech 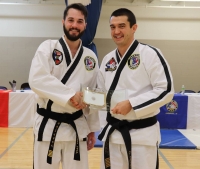 The studio will offer group taekwondo classes for age 4 and older.

Tumble 22 Hot Chicken—a Nashville hot chicken restaurant—has applied for a mixed-beverage license at the former location of PDQ, at 4501183A in Cedar Park.