Coffee With Impact: JT McCormick went from a horrific upbringing to being a CEO 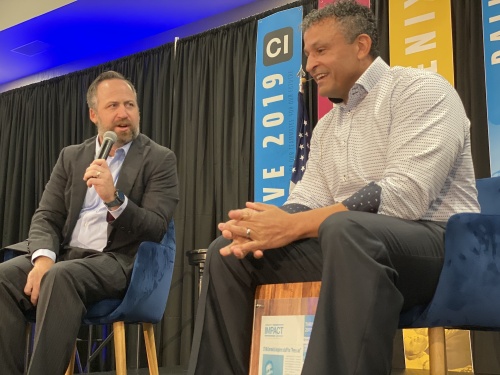 Severe neglect, sexual abuse, violence, poverty: JT McCormick readily and publicly discusses these defining aspects of his upbringing. Told in shocking detail, it quickly becomes evident for those who attend his speeches that the stories of his childhood are necessary to elucidate how he emerged from it all to become what he describes as a success story.

"I was born the son of a 1970s pimp and drug dealer," McCormick said Oct. 24 as an opening salvo—a half-hour introduction prior to speaking with Community Impact Newspaper CEO John Garrett for the company's Coffee With Impact series, which features area entrepreneurs. "My mother, she was an orphan. ... Unfortunately for my mother, one of the first people she met was my father."

He now lives in Cedar Park and has a wife and kids who form a family he describes as his greatest accomplishment. He gives motivational speeches regularly and runs a major publishing company. It is a far cry from where he started out in life.

"But it was what my mother went through that hurt me the most," McCormick said, divulging their daily struggles in the 1970s. He and his mother were targeted by others in their community for having to pay for basic needs with food stamps and for being part of a mixed-race family.

He said he would dig in the trash at school for leftovers because he knew there would be no dinner at home, and he would put bread bags over his hole-riddled shoes to keep his feet warm.

Reliance on food stamps eventually led to a welfare fraud charge levied on his mother, he said, which forced McCormick to move to Houston with his father and his father's prostitutes.

Still, he sallied forth into adolescence, and he got his first job cleaning toilets. He would later go on to work in the mailroom at Nationwide Mutual Insurance Co. in San Antonio, and a little later moved to Portland, Oregon to become a regional vice president for a mortgage company.

Further on in his career, when he was the president of a software company, McCormick said the urge to write his own memoir grew more intense. He never intended for it to become public, but he wanted to leave a legacy for his children, he said.

His memoir was published and is called "I Got There: How I Overcame Racism, Poverty and Abuse to Achieve the American Dream," but before that happened, he had to figure out how to go about the long, arduous process of writing a book.

"I reached out to my LinkedIn network. ... And I got introduced to the two co-founders of Scribe," he said. "One of the co-founders comes over to the software company [where he worked], and we're sitting at this 50-person conference table, and we're wrapping up, and he said, 'Oh man, sounds like you got a book in you.'"

From there, McCormick was asked to provide feedback for Scribe, which has made connections with more than 1,500 authors in the last five years. His feedback impressed the top brass at Scribe to the point that they first asked him to be an adviser, and then CEO. Scribe was 13 months old at the time.

To this day, McCormick said he uses the lessons from his youth to inform his approach to life.

"I feel like every piece of my story empowers me to keep going and have gratitude," he said. "I am always grateful for everything. You wake up in the morning, put your feet on the ground, and dammit, you'd better be excellent."