With Car2go set to leave Austin, future of dedicated parking spaces remains up in the air 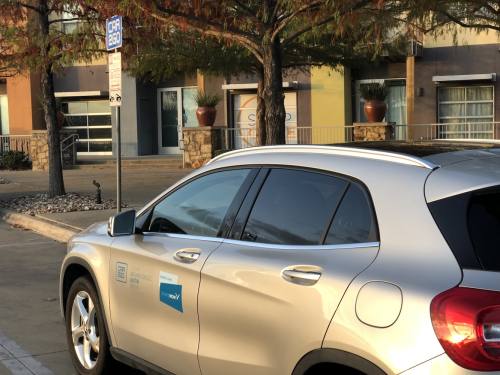 A Car2go vehicle sits in a designated space on Easy Wind Drive in Austin on Oct. 1. The company announced it will cease operations in four cities, including Austin on Oct. 31.

Car-sharing company Car2go will leave Austin, along with three other North American cities, on Oct. 31 and will pull out of Chicago by the end of the year. The company made the announcement Sept. 27 that it will rein in its operations, choosing to focus its efforts in North America on New York, Washington D.C., Montreal, Vancouver and Seattle.

“We have to face the hard reality that despite our efforts, we underestimated the investment and resources that are truly necessary to make our service successful in these complex transportation markets amid a quickly-changing mobility landscape,” the company wrote in a Sept. 27 letter to its members announcing the decision.

Car2go launched in Austin—its first U.S. market—in 2009. The service allows users to rent an available car on an hourly basis, pick it up on the street, then drop it off anywhere within a designated service area.

In March 2017, the city of Austin signed a contract with Car2go and two other car-sharing companies, ReachNow and ZipCar, which the city estimated would bring in $855,612 in revenue through the end of the 36-month contract in March 2020. ReachNow ended its service in July, while ZipCar still offers services in the city.

Austin has dedicated parking spots for Car2go and ZipCar users throughout the city, and Car2go users are able to park at metered spaces for free. Jacob Barrett, a spokesperson for the Austin Transportation Department, said the city will begin the process to determine the future use of those spaces once Car2go officially notifies Austin’s purchasing office of its intent to leave the city. The contract has a 30-day out, meaning Car2go must pay the city for 30 days after the official notification.

Barrett said options on the table for the city could include negotiating with another company to continue using the parking spaces in a similar manner to the way they are used today or finding another use.

“If no alternate use is found, Car2go spaces in paid parking areas like downtown would go back to being paid parking spaces, and spaces in free areas would be returned to be free,” he said.

Kendell Kelton, a spokesperson for Share Now—a joint venture between Car2go and BMW’s mobility service, Drive Now—said Car2go has 92,294 members in Austin. In a January press release, the company said it increased its number of members worldwide in 2018 by 21% to 3.6 million, including 1.2 million new users in North America.

At that time, Car2go said Vancouver, Calgary, Seattle and New York were its North American cities with the most members, each with more than 122,000.

In Austin, Kelton said Car2go is “working with the city to ensure a smooth transition when we cease operations at the end of the month.”

In 2017, the company replaced its local fleet of 300 cars with Mercedes-Benz vehicles, citing an enhanced user experience that made it easier for drivers to access and start the vehicles from the Car2go app.