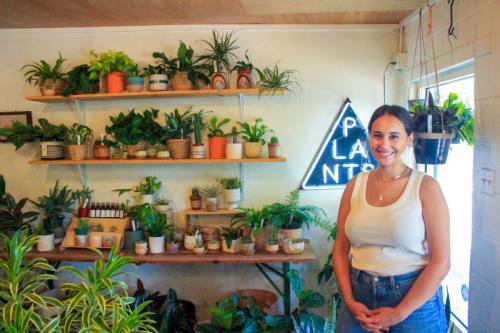 Sara Barnes said she knew she would pursue a career in interior design, which led her to open Frond in south Central Austin.

Before Sara Barnes opened Frond, she had a vision in mind for her business, right down to the name, the look of the space and the design.

Barnes grew up in an artistic family. Her parents, Julie and Omar Garza, run design-build firm Garzamade in Marble Falls, and she knew that plants would be the way she could share her own eye for design with the community.

With her vision in place, all Barnes needed was a space. When she and her husband, Matt, were driving around the South First Street neighborhood, they saw a for lease sign in a window on Mary Street. Barnes called the number and soon signed a one-year lease for the spot. She said she was still setting up the cash register when Frond opened in summer 2016.

This summer, the plant shop celebrated its three-year anniversary. Barnes said on the day she drove by, she knew the space would work and the conditions were right, but she could not have predicted that the local neighborhood would be such a critical piece of her success.

“I have had so many regulars from day one. They think of me if they need a gift or if they’re having people over,” Barnes said. “I think that’s been the key to success, being in this neighborhood with these people.”

Although the locals have been the crucial part of Frond’s staying power, social media has helped to extend the store’s reach. Some customers come in looking for plants they have they have seen on Pinterest—including the Chinese money plant that sits on the window greeting those who enter the front door. Over three years, Frond’s own Instagram account has also built a following, amassing more than 12,000 followers.

Barnes said she selects plants from a local wholesaler, a method that allows her to pick and choose to meet what she called her “quirky” aesthetic. The choices create an atmosphere in the store around the plants, ceramics and decor, just as a customer would use plants as a centerpiece of design at home.

“I just love the way they change a room,” she said.