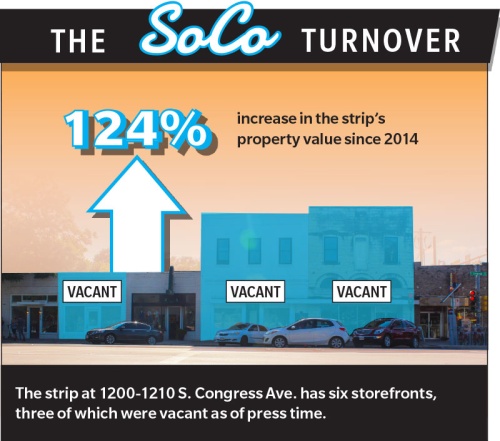 The strip at 1200-1210 S. Congress Ave. has six storefronts, three of which were vacant as of Community Impact Newspaper's press time.

Shortly after Home Slice Pizza opened on South Congress Avenue in November 2005, the power went out.

The gas pizza ovens did not rely on electricity, so co-owners Terri Hannifin and Jen Strickland decided to stay open. They found enough flashlights to make sure the kitchen was safe and asked an employee to bring in a guitar. A customer who lived in the neighborhood ran home and brought back a bag of candles.

Over the past 14 years, the development of the power grid is just one of many changes along the corridor, business owners said.

Many local businesses—including antique store Uncommon Objects, which opened in 1991 and relocated in 2017—have been priced out due to sharply rising property values.

The strip at 1200-1210 S. Congress Ave. is half vacant, with empty storefronts where The Turquoise Door II, Favor the Kind and 20-year veteran Blackmail Boutique used to be. Its assessed value has more than doubled since 2014, per the Travis Central Appraisal District.

Across the street from the strip, a new mixed-use development called Music Lane is expected to open in October. Its tenants include upscale gym Equinox and London-based members-only social club Soho House. The developer, Endeavor Real Estate, declined an interview request.

Moving south, another mixed-use project is slated for the corridor; Hummingbird will fill a vacant lot between Italian restaurant Vespaio and South Congress Books when it opens next year.

In between more national retailers have set up shop, including women’s clothing store Madewell and California-based lifestyle brand Aviator Nation, both of which opened in the last year and join Warby Parker, Goorin Bros. and Toms.

Other developments orbit the SoCo district and will likely increase traffic and property values in the area.

These include two forthcoming mixed-use projects from PSW Real Estate on South First Street; the recently announced remodel of the H-E-B at South Congress and Oltorf Street; and the South Central Waterfront initiative, a vision plan adopted by Austin City Council in 2016 to guide the redevelopment of 118 acres along Lady Bird Lake, including the Austin American-Statesman property.

At a June 17 meeting of the South Central Waterfront Advisory Board, a representative for the Cox family, which owns the 18.9-acre Statesman site, presented a redevelopment plan. As proposed—and pending a zoning change—it would include multiple buildings, some as high as 40 stories, and 12.5 acres of space for public use.

“[Rising property values] might make it unsustainable for the local, independent shops, and that’s nervous-making ... And heartbreaking. However, that’s what happens,” Hannifin said. “On the one side, we’re proud to have been part of why Music Lane will most likely be very successful.”

On the other, she continued, Home Slice struggles to hire employees and to provide adequate parking because of the corridor’s continued growth.

Just over a mile away from the Capitol, South Congress was largely disconnected from downtown Austin until 1910, when a concrete bridge was constructed across the Colorado River.

“Almost immediately, new residents moved to the area, and new stores cropped up along South Congress to serve them,” per the South Congress Avenue Preservation Plan, commissioned by the city of Austin in 2003.

The Hotel San Jose was built as a motor court in 1936, and The Continental Club, a music venue, opened in 1955. Schlotzsky’s got its start on the avenue in 1971 before becoming a national chain.

Still, for many decades, the area maintained a “second-class status” relative to the city north of the river, according to the Bouldin Creek Neighborhood Association website.

When Gary Hyatt, now a BCNA member, moved to Eva Street in 1986, he said his decision was met with surprise.

“It used to be a little rough,” he said.

Eight years later, Liz Lambert purchased the Hotel San Jose. By 2000, she had scrounged up enough money to transform the place, previously “a haven of drugs, crime and cyclical poverty”—per a documentary, “The Last Days of the San Jose,” she made about the process—into the start of a hospitality empire that now includes Jo’s Coffee, Austin Motel, Hotel Saint Cecilia and the forthcoming Hotel Magdalena in the South Congress neighborhood alone.

Since the early 2000s, the strip has flourished, with new restaurants, local businesses and boutique hotels opening their doors.

“I’ve always been really the eternal optimist down here and the first to try to unring the alarm bells that the headlines often ring about the death knell of South Congress, with each passing business,” said Brandon Hodge, president of the South Congress Merchants Association and owner of Big Top Candy Shop and toy store Monkey See Monkey Do. “But in the past, almost always, those ... local businesses were replaced by other local businesses.”

Some properties along South Congress have seen their values skyrocket in the last five years, including  the site of the South Congress Hotel, which has increased nearly 14-fold, and that of Amy’s Ice Creams, which has more than quintupled, per TCAD data.

“So it’s up to the landlord,” said Andrew Botticelli, who opened Italian restaurant Botticelli’s with his brother Matt and their longtime friend, Timmy Brown, in 2007. “Landlords really are the ones who hold the most power in how this city continues its growth.”

Botticelli and his partners found their space through a personal connection and were able to secure a lease agreement before the property was listed publicly, allowing them to secure all their asks—an existing kitchen, an outdoor patio—without what he called “a deep bank roll.”

Similarly, when restaurateur Daniel Brooks and chef Ryan Samson took over the ownership of Vespaio and its casual counterpart Enoteca Vespaio earlier this year, they inherited the same lease terms as their predecessors.

“Good landlords like [ours] make it possible for locals and long-timers to stay on the street,” Brooks said.

Other challenges are more intractable.

“We’ve seen a proliferation of higher-end businesses on South Congress. … [This change is] better for some. It’s worse for others,” Hodge said, including his nostalgia candy shop as one for which it is worse.

This change has been mirrored in the surrounding residential areas, where rising property values have altered the demographics and led to a growing supply of short-term rentals.

“Because of the cost of living here, we’ve gotten a lot more high-tech, higher-income [residents],” Hyatt said. “I’ve got nothing against that, but, so far, not many of them have engaged with the neighborhood.”

Despite these challenges, some local business owners are hopeful about their future on South Congress.

“If you’re living around here, I can see how frustrating it could be, with the traffic and all the pedestrians making it harder for your get home,” Brooks said. “But for business, that’s exactly what you want. You want to be in a spot where it’s crazy busy.”

The area’s growth has undoubtedly benefited some local businesses, including Home Slice, which opened a second location in the Hyde Park neighborhood last year, and Kendra Scott, which has gone from local upstart to international retailer all while maintaining a location—most recently, a new flagship—on South Congress.

More change is inevitable in the coming years.

“We can’t put up gates at the airport or tell private properties, ‘Sorry, no more redeveloping,’” said Alan Holt, principal planner for the city of Austin, who is leading the South Central Waterfront initiative, just north of the SoCo corridor. “That’s not how it works.”

Instead, Holt is hopeful the waterfront vision plan will help guide redevelopment in a sustainable way that prioritizes green space, walkability and affordable housing.

“The idea is, knowing that development is going to happen here anyway, how do we create incentives to make it happen in a really cohesive, great way that can provide a model … that can be replicated elsewhere in the city,” he said.

The initiative has a 20-year timeframe. As veteran tenants know, South Congress is liable to transform in that amount of time.

“On a daily basis, we have to come in here and make sure that the soul is kept intact,” Brooks said. “I strongly believe that as long as we stick to our standards and even improve them, [we] have no reason not to be here for the next 20 years.”