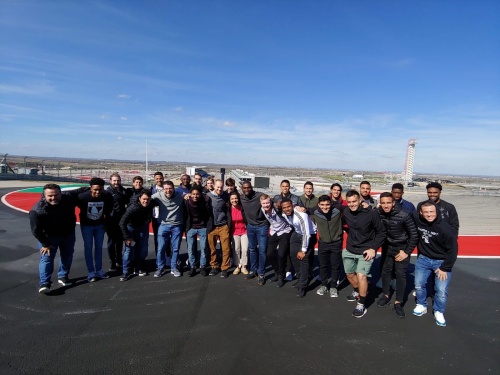 While a large part of the local sport’s spotlight over the past 15 months has been pointed at Austin FC’s efforts to bring Major League Soccer to the city, Austin’s United Soccer League team, Austin Bold FC, has been preparing for its inaugural season.

Construction of the team’s new 5,000-seat stadium, located at the Circuit of the Americas, 9201 Circuit of the Americas Blvd., Austin, is also underway. Austin Bold FC General Manager Roberto Silva said the foundation for the project was completed Jan. 14, and installation of seats has begun. The team expects the stadium to be completed by opening day.

“It’s amazing, us all being here for the first time together,” Bold head coach Marcelo Serrano said at a media event Jan. 22. “The feedback from the community, it’s definitely a good sign [for] soccer coming to town. “

“I think this is the first time in professional soccer Austin has a real shot,” Silva said.

He said the Bold “could not be more different” from the Austin Aztex, the now-defunct soccer franchise that played games at Austin ISD’s House Park from 2012-15 and played one season in the USL in 2015 before being dissolved.

He pointed to the Bold's under-construction stadium and the overall experience it will offer fans as well as the quality of players the Bold have put together as reasons he believes the franchise will be successful. Both are due to owner Bobby Epstein’s willingness to invest in the team and his passion for the game, Silva said.

Soccer analytics website Transfer Markt already lists the Bold’s roster as having the highest market value in the USL, something Silva said shows the team should compete from day one. He said he expects the market value of the team’s opening day roster could be worth double of any other squad in the league, according to Transfer Markt.

“We have a proper home, a specifically [designed] and privately funded stadium, which is important to us,” he said. “We are trying to create a different soccer environment overall, and I think that is something that helped bring those players [to Austin].”

Silva said he looked for players who were good people, not only good athletically, in order to create a positive locker room environment.

“I have a feeling we did it right, and we’re on the right track,” he said.

While the franchises will not be directly in competition on the field, they will be competing for entertainment dollars with each other as well as other local events and activates, he said.

“I look at my squad; I look at my ownership and the stadium we are building, and I think of the barriers we have already passed over the last year; why not break this one and make this successful despite whatever happens with MLS in Austin?” Silva said.

On Jan. 14, Anthony Precourt, the investor-operator of Austin FC, told Community Impact Newspaper he felt both teams could benefit each other and increase soccer’s popularity in the area, which Silva said he agrees with.

Silva said the Bold’s ownership is not against Austin FC joining the area but feels the deal given to the group by the city of Austin will give MLS an unfair advantage and a head start on being profitable locally.

“It has little to do with the competition it brings this franchise; I believe we can make it successful no matter what,” he said. “It’s just that we [feel] it has to be an even playing field.”

Serrano said the culture around the sport in Austin will be important for both franchises.

“We are soccer people,” he said. “For me, it’s not this team or the other team. If I love the game of soccer, then it’s about soccer.”