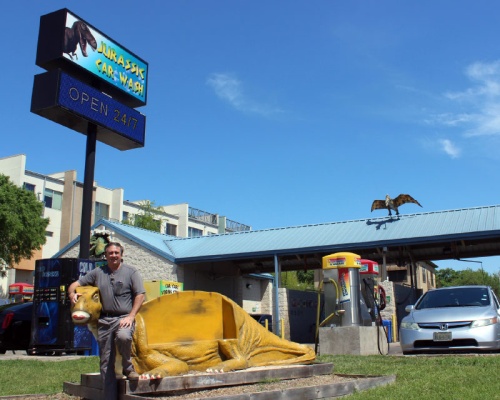 “I have flying saucers at my house; I own a Batmobile, custom golf carts, old soda machines and old cars, so I didn’t want to just have a typical car wash,” he said. “I thought people would like a few dinosaurs here.”

Before it became “Jurassic,” the car wash was operational for about nine years on Congress Avenue under different ownership. Borek purchased the car wash in February 2015, shortly after he sold his body shop business, Autocraft Bodywerks, located 2 miles south of the car wash.

He said he purchased the first two dinosaurs as Halloween decorations for his house after his UFO display got stale in its fifth year. Borek decided to relocate them to his new business after neighbors complained he kept the decorations up too long after the holiday.

Collecting additional pieces and modifying them to work around the business are projects that have helped Borek continue using the skills he honed through his years as an auto mechanic, he said.

“For something to be successful you have to be passionate about it,” he said. “Dinosaurs are fun. I don’t know too much about [the different species], but kids come here and know every one of them.”

Services at Jurassic Car Wash include four self-service stations with soap and hoses, stations for vacuuming and shampooing the interior of a vehicle, and the standard automatic machine. There is also the enclosed Jurassic Pet Wash station for animal lovers needing to clean their pets. All services accept credit card payments, he said.

While the dinosaurs typically attract customers initially, he said the facilities and machinery are up-to-date and regularly maintained, assuring customers will come again for the high-quality service.

“We do things a little differently, which is why you see cars lined up into the street during the day,” he said. “Hopefully when they come here people will have fun, too.